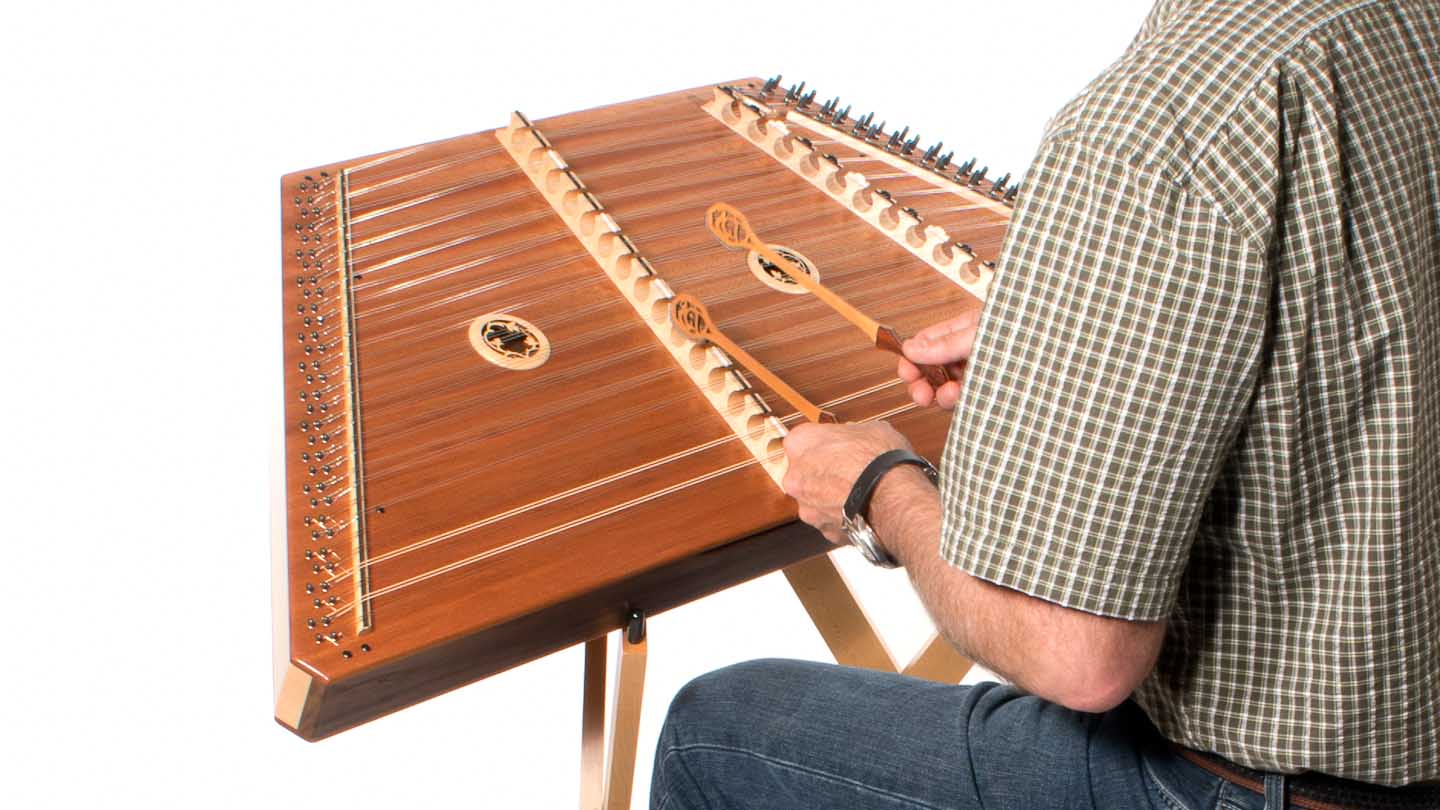 What is a hammered dulcimer anyway? How do you know where the notes are? What kinds of music can you play? Is it hard to learn? We hear these questions all the time, so we've put together some basic information that a beginner might find useful. There is a lot more detailed information elsewhere on the site, and you're more than welcome to give us a call if you'd like to talk to a person!

A hammered dulcimer is usually set up on some sort of stand or leg, with the strings facing up and the longest edge of the trapezoid facing the player. You can play standing up or sitting down, depending on the height of the stand. Strings are grouped together in courses, most commonly in pairs on modern instruments, and all the strings in a course are tuned to the same note. Strings are usually anchored at one end on a hitch pin, and they wind around a threaded zither tuning pin at the other end.

How do you make a sound?

You play by striking the strings with a pair of hammers, which are often made of wood and can have a variety of striking surfaces to produce different types of sound. You hold a hammer lightly between your thumb and pointer finger and let it bounce on a string, preferably close to one of the bridges. Playing with bare wood hammers gives you a sharper, more percussive tone, while playing with a softer surface like felt or leather produces a gentler, more piano-like tone.

How do you find a major scale?

How long does it take to tune a dulcimer?

The first time you tune a dulcimer, be prepared to spend a while on it! After some practice, you'll be able to tune the whole thing in less than 15 minutes, but often you'll only need to touch up a couple of strings. A well-built, stable instrument can stay in tune for a few weeks in a constant environment, although changes to temperature and humidity will affect even the most stable hammered dulcimer!

What kind of music can you play on a hammered dulcimer?

Most traditional American hammered dulcimers have the major keys of F, C, G and D easily available, which works well for a variety of musical styles like old-time, bluegrass, hymns, Celtic tunes, and even some pop music. In a very basic sense, you can think of a small dulcimer as being similar to a piano with only the white keys. If someone calls a tune in E-flat, you might be sitting that one out.

The larger the dulcimer is, the more keys there are available, and certain instruments might also incorporate additional chromatic notes outside of the traditional major-scale tuning scheme. This allows you to play music that modulates or is full of accidentals, and is more like having both the black and white keys on a piano. It makes certain styles like blues, jazz, classical and non-Western folk music easier to play.

To get an idea of the wide range of music that people play on hammered dulcimer, check out the videos in this blog post. Dulcimer is also being used more and more by composers who write for film, and you can hear some examples of that in this post.

How much do hammered dulcimers cost?

We make our dulcimers in a wide range of prices - from about $700 up to around $4,300. The main factors that affect the price are the materials (solid wood vs. laminated wood), the size/range, and the complexity of the design. (More details on these differences can be found on our Dulcimer Finder page.) We place the same value on quality with our least expensive dulcimers as we do with the top-of-the-line models, and we expect them all to last for generations.

Deciding on a size

When deciding on a size, our advice is always to go for as much range as your budget allows (taking into account any space or weight limitations, of course). 12/11 is a common size for a small dulcimer, and it means there are 12 courses of strings on the treble bridge and 11 courses on the bass bridge. It's easy to think that a beginner should start on the smallest instrument, but unless they have specific portability needs, most people who progress in their playing eventually find the 12/11 size to be somewhat limiting and they move to something with more low notes. Of course, budget is a concern for most of us, but trust us that you won't regret starting with more range if you can swing it! It's just as easy to learn on a 16/15 or a chromatic as it is on a 12/11, so there's no reason to limit yourself just because you don't think you're good enough yet.

Which hammered dulcimers sound the best?

Hammered dulcimers all sound different, and the internet comes in very handy when you can't travel around and try a bunch of different brands in person. There's no "right" or "better" dulcimer sound, so just start exploring YouTube videos and notice what your gut tells you! Do you find yourself liking it when the strings ring for a long time and build up a big wash of sound, or would you rather the notes had a shorter sustain and were more distinct from each other? Are you drawn to bright, sparkly high notes or rich, deep bass notes, or both? We have recordings of most of our dulcimer models on our video page.

On the practical side, you want to make sure that you can tune the dulcimer and that it will stay in tune. A brand new dulcimer can take a few weeks to settle in, but after that, it should hold its tune for a few days at least. It will quickly get frustrating if you're spending more time tuning than you are playing! If you can't get the dulcimer in tune to begin with, it's possible there's a larger structural issue that should be investigated. Once again, the internet (taking anomalous reviews with a grain of salt) can be a helpful resource for finding out which instruments have a reputation for tuning stability.

We expect that most beginners will have at least a few questions that aren't covered here. There is a lot more information on our website, but we also love helping beginners explore this delightful instrument, so please email us or give us a call if we can be of any help! We're not pushy salespeople, and there's no question too silly to ask.

There are a few stores around the country that carry our dulcimers, and we'd be happy to find out if there's a place near you where you could go and try them out. If there isn't, we can ship a dulcimer to you from our workshop here in Seattle, with the guarantee that you can return it for a full refund (minus the shipping cost) if it doesn't meet your expectations.

If you're lucky, your local music store will have a hammered dulcimer teacher in residence, but if not, there are lots of other options for learning to play!There are also a lot of ways to learn on your own, from YouTube videos to online Dulcimer School to books and DVDs. Many people even skip all of that and just play by ear!

Can I really do this?

Absolutely! Hammered dulcimer is one of the most satisfying instruments to learn because it's easy to make a pleasant sound right from the beginning. You can start at any age, and you can have fun with it even if you don't know any music theory and have never played an instrument before. And having fun is the entire point! You don't have to make a career out of it, you don't have to practice every day (although you might find you want to!), and you don't have to perform for anyone besides yourself if that's what makes you happy.

If you're looking for a place to start, here are some popular choices from different parts of our price range. The Overture combines affordability with a satisfying amount of playing range. The D45 is our mid-priced solid-wood model, the D550 offers a slightly richer tone and more bass notes, and the D670 is the "grand piano" of dulcimers, with the biggest sound and the largest range.

You can also view our full line of hammered dulcimers here. 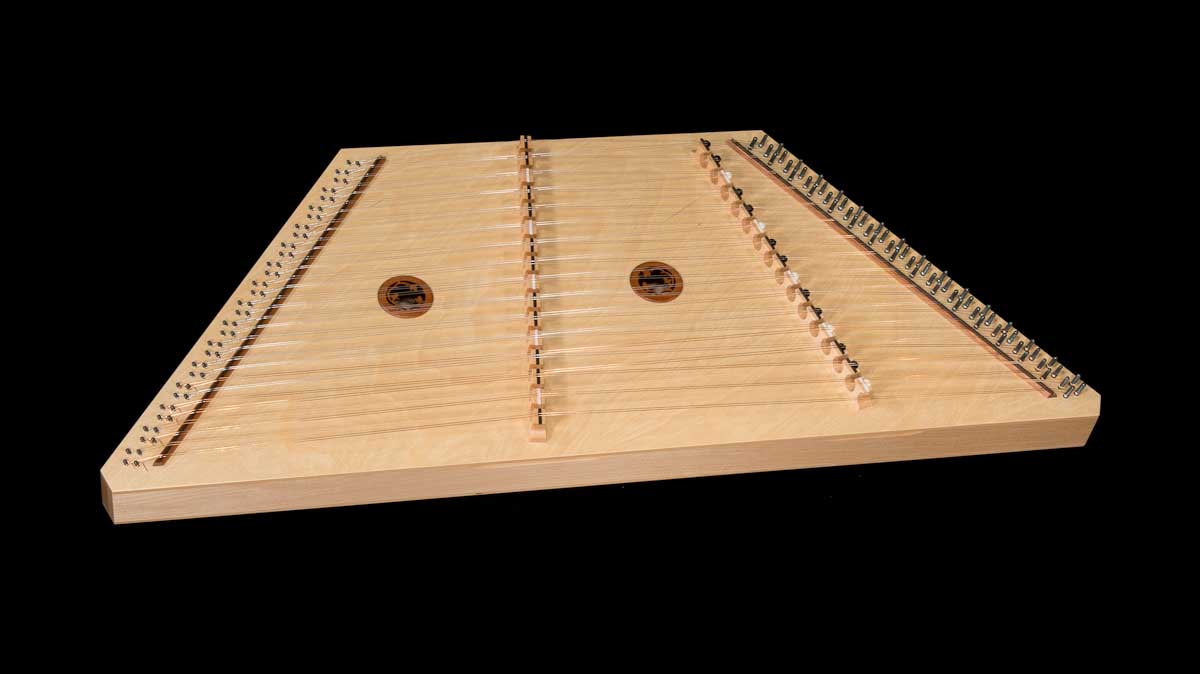 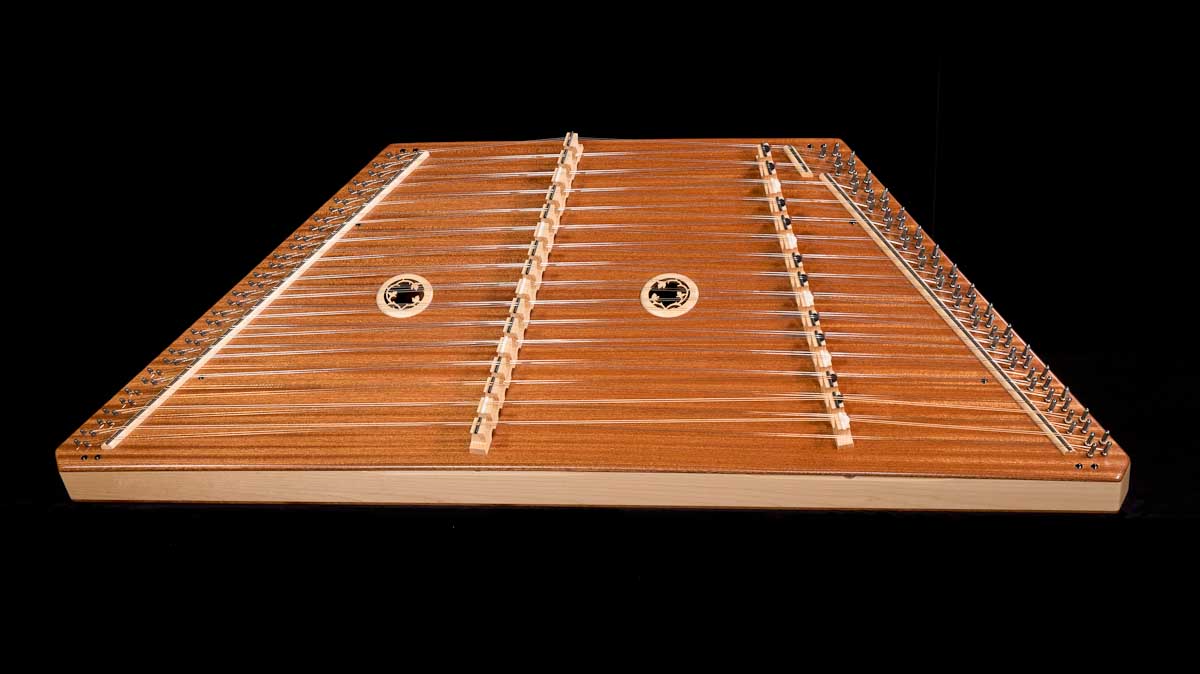 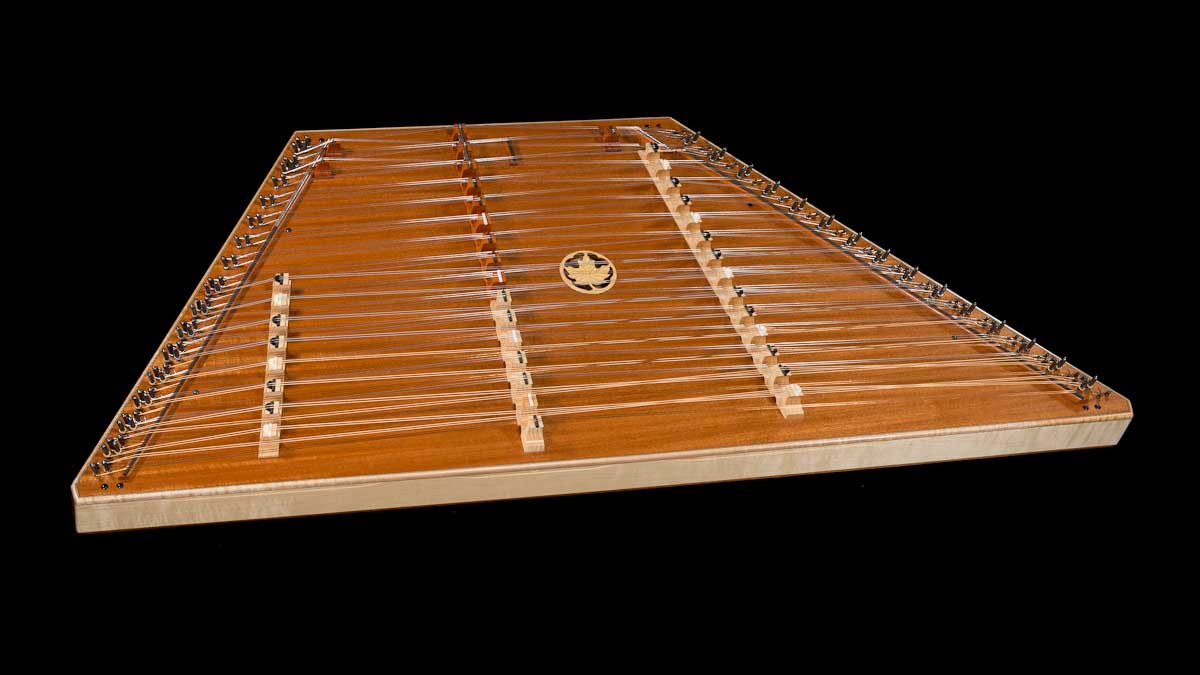 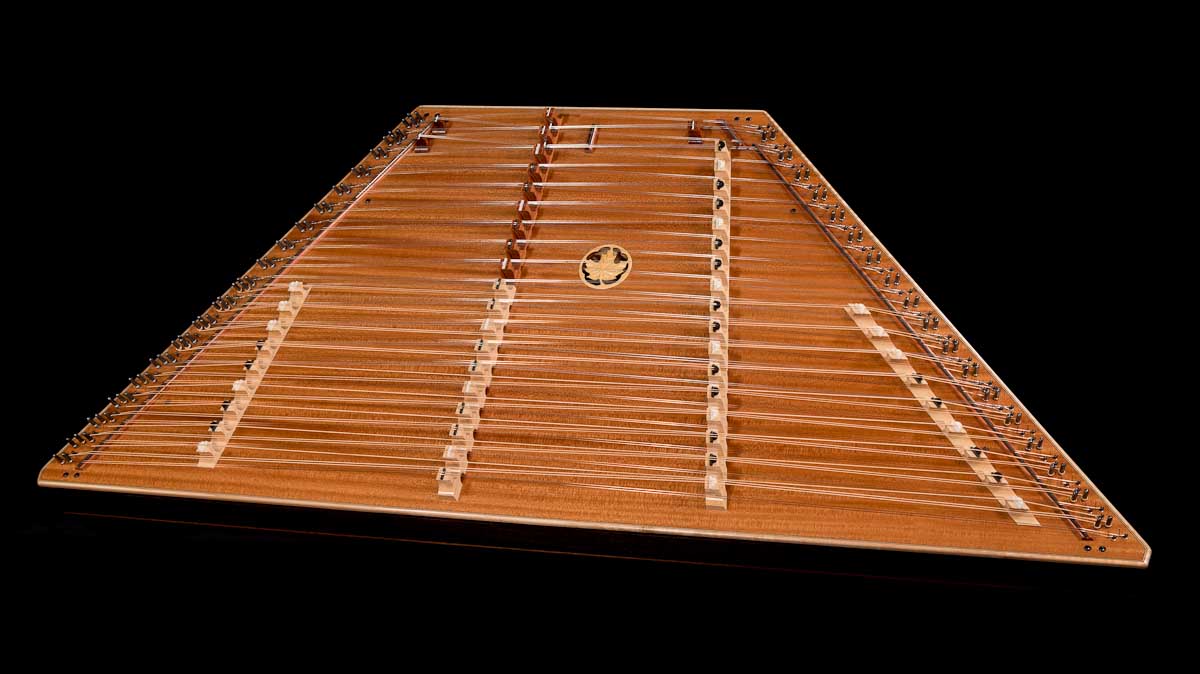