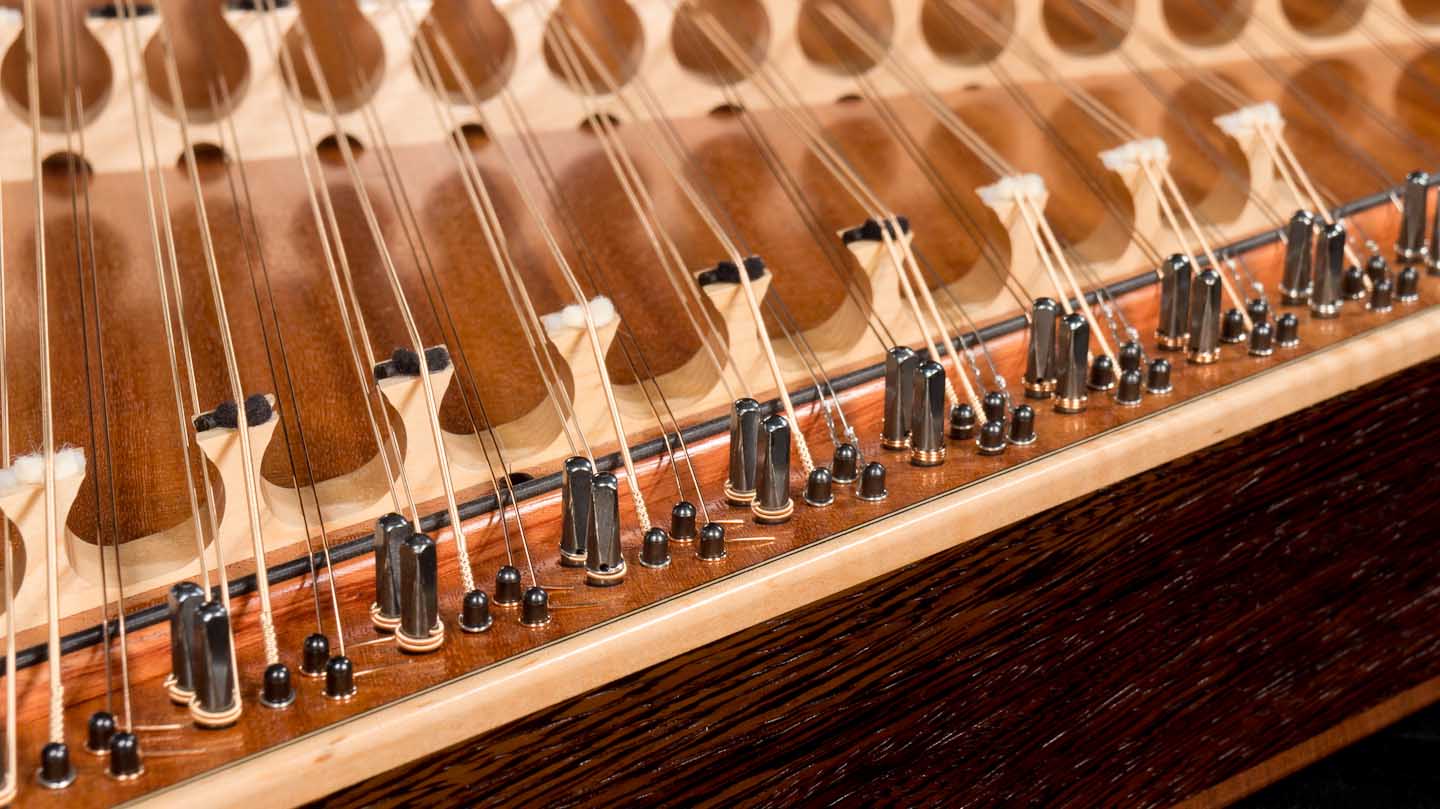 The instrument is tuned in major scale sequences. The major scales available on most dulcimers with the traditional tuning are D, G, C, F, and sometimes A and E. B minor, E minor, and other modes associated with those major scales can also be found. The fact that there are multiple diatonic scales available means that each scale also has some chromatic notes, which it borrows from other scales. For instance, the diatonic scale for the key of G has an F#, but you can also play an F natural, since that note shows up in the neighboring diatonic scale for the key of C. Playing in alternate keys is usually possible, although inconvenient, by re-tuning one or two courses of strings up or down a half step.

The Overture and D45 are configured in this traditional way.

Fully chromatic hammered dulcimers use all kinds of tuning schemes to achieve the availability of all sharps and flats. The way we set up our Chromatic Series instruments is a variation on the traditional fifth-interval tuning. The chromatic notes either replace duplicated notes or are added by means of new bridges. Players accustomed to traditional tuning usually have little difficulty adapting to this style of chromatic tuning, and a beginner can learn on one of these instruments just as easily.

Another approach to a fully chromatic dulcimer is the Piano Dulcimer tuning scheme invented by long-time dulcimer designer and builder Sam Rizzetta and licensed to Dusty Strings. While the Chromatic Series is pattern-based like the traditional tuning scheme, the Piano Dulcimer is laid out in a more linear fasion, modeled after the keys on a piano.

Each course of strings crosses two bridge markers, which are white for the natural notes, or C major scale, and black for the sharps and flats, just like on a piano. To play a C scale, you just follow the white markers up the instrument. There are half-step intervals across the bridge, so a chromatic scale goes in a zig zag, starting on the left side, jumping to the same string on the right, then to the next string up on the left, then right, and so on. It's easy to change keys because all the scales follow one of two patterns, and the sharps and flats are where a keyboard player would expect to find them - next to the naturals.

Our piano dulcimer model, the PD40, is a less expensive way than our Chromatic Series to achieve full chromaticism, and it also sometimes makes more sense to people who have a keyboard background. For mostly diatonic music, the traditional tuning tends to work better, since the notes in a particular key are all close together and it's easy to learn simple accompaniment patterns, but the piano tuning can be very useful for composing or playing music that doesn't fit very well within the traditional pattern. It's important to recognize that it's a relatively new instrument, and there is very little, if anything, in the way of instructional materials or teachers who are prepared to teach in this tuning, so be prepared to be self-sufficient in learning and working out your own arrangements!

Through many years of building dulcimers, we have focused a lot of attention and research on strings. We have carefully balanced the string gauges and materials across each instrument for the best tone and tension, providing a comfortable and consistent resiliency. This is a subtle detail that gives our instruments a pleasing feel under your hammers, as well as a balanced and even tone.

See our dulcimer strings page for more details, including string diagrams and information about ordering and replacing strings.