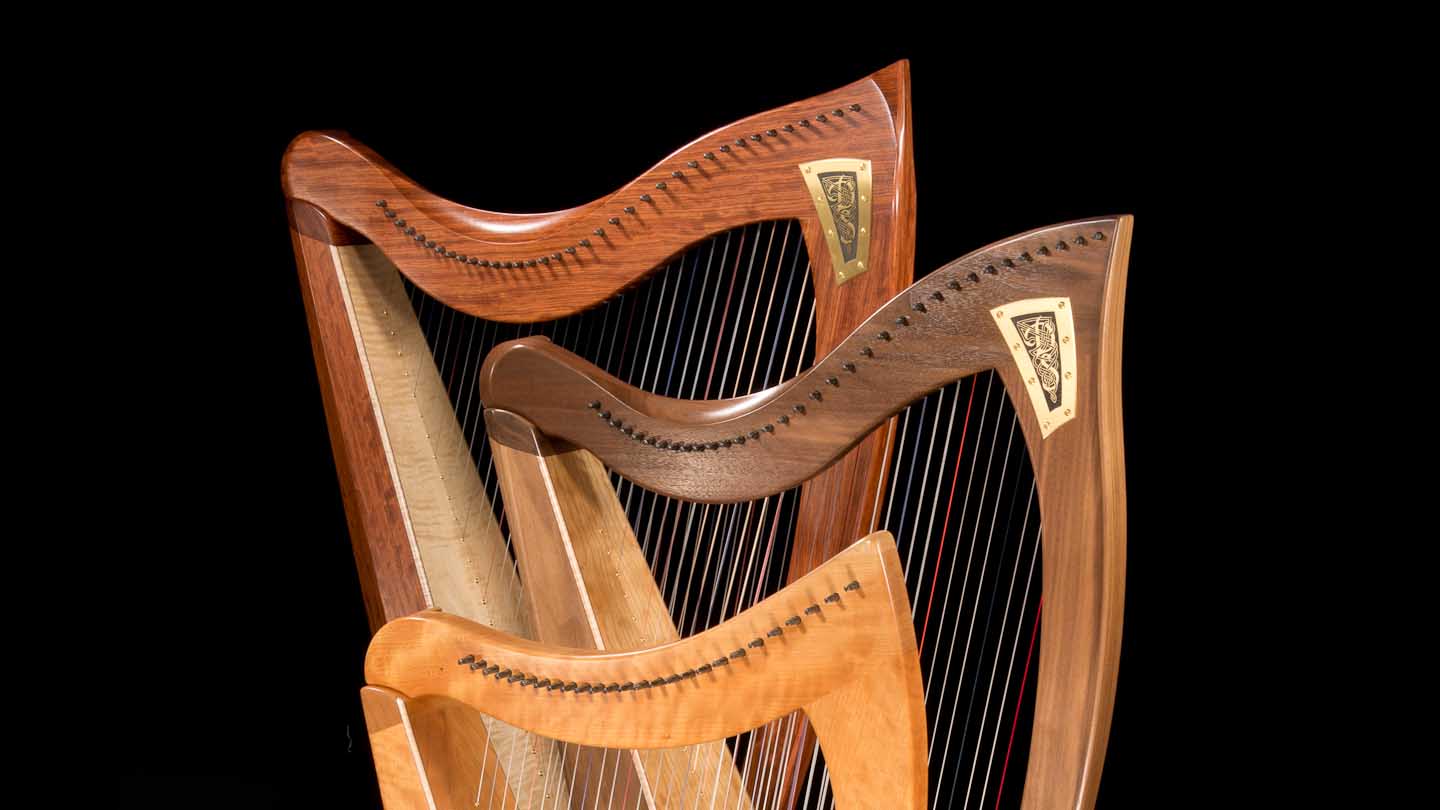 Not all harps have the same features, and not all harp builders or harp players have the same names for the parts of the harp. Here is a diagram showing what we call these parts at Dusty Strings. 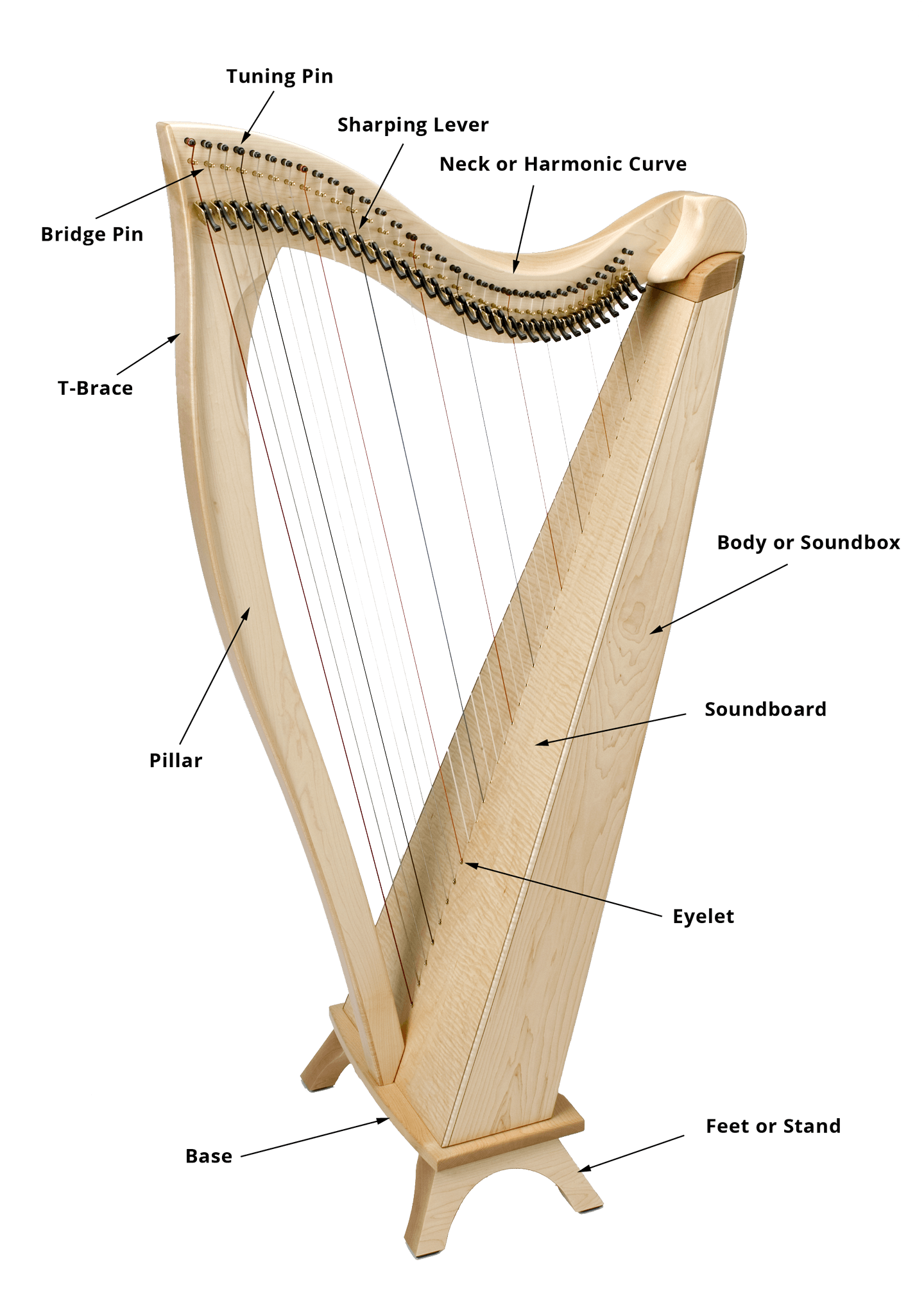 Dusty Strings makes three lines of harps: The Ravenna line, the Allegro/Crescendo line, and the FH line. The biggest differences between the three are the woods used. Like guitars and many other musical instruments, harps are available in various combinations of laminated and solid wood. Typically harps made of all solid wood have more resonance, clarity, depth and richness of tone than harps made of laminated wood, but they are also more time-consuming to make and generally cost more.

The body of a Ravenna, Serrana, or Boulevard harp is made of laminated birch from Finland. It is the highest grade of plywood available, looks quite nice, and has the added benefit of being fairly impervious to changes in temperature and humidity, enhancing the instrument's stability. It gives a clean, clear and pleasing quality of sound. The soundboard has a clear lacquer finish over the wood, and the sides and back are covered with a thin ash-grained vinyl veneer in black (or burgundy, for the Serrana). The neck and pillar and other small parts of the harp are made of solid ash on the Ravennas, laminate birch and carbon fiber on the Serranas, and solid beech on the Boulevards.

The laminated soundboards we use on the Ravenna, Serrana, Boulevard, Allegro and Crescendo models are made of the highest quality birch plywood imported from Finland. In addition to being time-efficient for us to use in building, this material provides a nice, even sound, an attractive look and an inherent strength and stability.

The Allegro 26 and Crescendo 34 have a laminated Finland birch soundboard, with back, sides, neck and pillar of solid sapele, which is an African wood very similar to mahogany. The use of solid-wood for the sides and back gives these harps a bit more resonance and clarity when compared to the all-laminated soundbox of the Ravenna series.

The laminated soundboards we use on the Ravenna, Serrana, Boulevard, Allegro and Crescendo models are made of the highest quality birch plywood imported from Finland. In addition to being time-efficient for us to use in building, this material provides a nice, even sound, an attractive look and an inherent strength and stability.

The all-solid-wood FH series gives the most of everything - volume, resonance, clarity, smoothness and articulation. We currently make our FH harps in a choice of five species of hardwoods (see the "Wood Choices" tab for more details). Because these woods cover a spectrum of tonal as well as visual color, deciding which one you want for your harp can be a fun voyage of discovery.

There are three basic factors to balance in choosing wood - appearance, price and sound. The first two are fairly straightforward. People will be drawn visually to a particular wood for many different reasons, and everyone has their own budgetary issues to address. Price relates to the scarcity factor of the wood and the difficulty in working with it, and does not necessarily mean "better" (unless it happens to be your favorite). Sound, however, can be the hardest to pin down if you aren't in a position to play and compare woods first-hand. Because they all sound good, deciding which is "best" becomes purely a matter of personal taste.

Some harp companies build all of their harps out of the same wood, often laminated maple. In this case, a "walnut" or "mahogany" finish will be produced with a stain or colored lacquer to mimic the appearance of that wood, and this will not change the tone of the harp. Our FH series harps have a clear lacquer finish, so the different appearances are due to the colors of the different species of natural hardwoods that we use. In addition, these different woods each impart their own unique tone color to the harps, and this is the magic and beauty of building harps out of solid wood; they each have their own distinct personality!

The Wood Choices tab talks in more detail about the differences between the species we use, and you can also compare the sounds on our harp videos page.

In addition, we do something unique with our solid wood soundboards to gain the precise sound we're after. Early in our development process, we conducted "blind" experiments with a panel of harp players and a series of test harps with different tone woods and soundboard thicknesses. The players chose mahogany for its resonance and clarity in the mid and treble ranges, but preferred spruce for its warm, "fat" sound in the bass. If we were bound by the tradition of using a single tone wood, this would have presented a dilemma.

Instead we challenged the traditional approach with a two-part soundboard, using each wood where it produced the best results. For our larger harps, we use spruce in the bottom third of the range and mahogany in the top two thirds, and we believe this approach has given us the best of both woods.

In the case of our solid-wood harps (the FH series), each species of wood lends its own character to the tone of the harp. The differences are relatively subtle, and all of our harps (except the Boulevard) fall in the brighter range of the general harp spectrum, but within that range, the choice of wood opens up a great opportunity to tailor the sound a bit to match your tastes.

If you can't compare them in person, we encourage you to listen to our recordings of the different wood types, and also to take a look at the following diagram and verbal descriptions. Everyone hears things a little differently, but people generally seem to agree on the main points.

The three points represent the three woods that have the easiest-to-differentiate tonal characteristics. Maple has a very bright, crisp and focused tone. Walnut has a softer, mellower, warm-and-fuzzy tone. Bubinga is loud and bold with a big and resonant bass.

Cherry and sapele are more difficult to characterize, which is why we put them between the points of the triangle. Cherry has a lot of the characteristics of bubinga (depth, boldness and resonant bass), but also has some of the warmth and softness of walnut. We think of it as being between the two, but somewhat closer to bubinga.

Sapele is the hardest to describe because it has a little of everything and not too much of any particular characteristic. It could be considered the one-size-fits-all wood, or it could be be the perfect solution for someone who feels that maple is too bright, bubinga is too loud and walnut is too mellow. Sapele could be just right!

Here are some photos showing the different types of wood we offer in our FH series. Note that these are samples only, and being a natural material, wood can vary quite a bit in color and grain pattern.

For long-lasting protection and beauty, each instrument receives multiple applications of clear lacquer, allowing the true color and character of the wood to shine through.