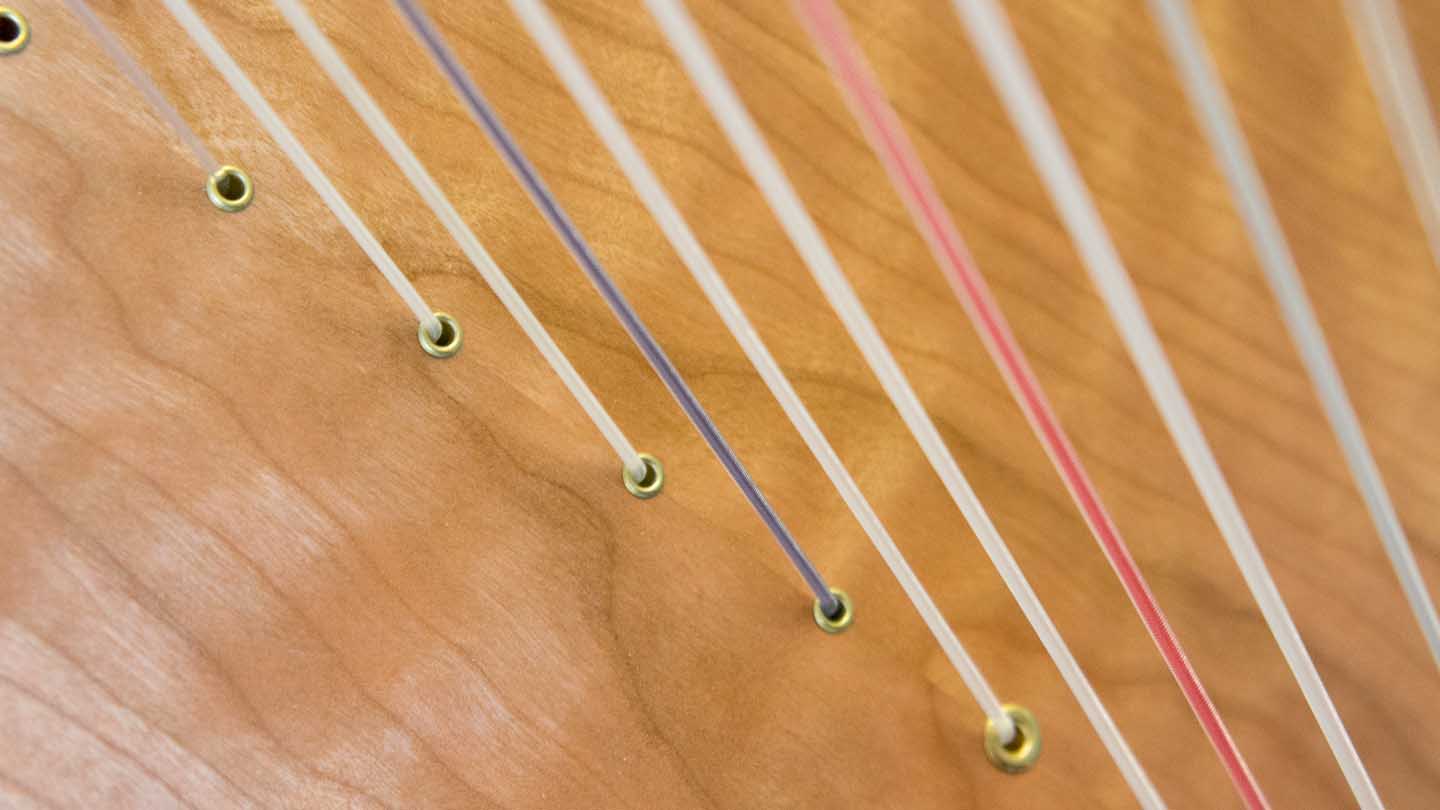 Because strings are such an important part of how a harp functions and sounds, we focus a great deal of attention on them! Following is some general information about harp strings, as well as specifics about the strings we make for Dusty harps.

How are harps tuned?

Most harps have some colored strings to help you find your way around. Generally, C strings are red and F strings are blue or black. When we ship someone a Dusty Strings harp, it is usually tuned to the key of C, which has no sharps or flats. In this tuning, a major scale starts on a red string and goes up to the next red string. If you have sharping levers on the harp, those can be used to change the key without re-tuning the harp (see Sharping Levers for more on that subject).

It is possible to tune a harp in a key other than C, but there are a few caveats. It is generally not a good idea to tune the strings any higher, since that puts more tension on the soundboard, neck and body, and the harp may not be designed to withstand that much tension. So tuning to the key of A, for example, which requires you to raise the F, C and G strings by a half step, could be risky.

You can safely tune the strings lower than C major, and in fact, E-flat major, which lowers the B, E and A strings by a half step, is a common and versatile open tuning. If you go too low, however, you'll probably notice that the strings feel a bit loose and don't have the same quality of tone.

We also offer lever gut strings as an option. Because gut is a natural substance, its tensile strength varies much more than nylon, and it can be more prone to breaking. People sometimes choose gut because of the tactile "grip" or because they want a slightly warmer, smoother sound. On our harps, gut strings are slightly less bright than nylon, but maintain the compelling character of the Dusty sound.

The Boulevard 34 is different from the rest of our harps and is designed specifically for pedal gut strings. These strings are higher tension (also known as concert tension) and give the Boulevard a warmer, less bright sound with a shorter sustain than our other harps. Concert tension lever harps are often chosen by pedal harpists who want something smaller than a pedal harp but with a similar feel and sound, and by students who will eventually move on to pedal harp. Because of the high tension, pedal gut strings should not be used on any of our harps except the Boulevard.

We are occasionally asked about a class of harp strings variously called fluorocarbon, synthetic gut, KF or carbon fiber. They have a higher density than nylon and can be used to advantage on harps with a short scale length to produce a brighter tone and eliminate some wound strings. In side-by-side comparisons with nylon, groups of harp players generally concluded that fluorocarbon strings were a bit too brittle- and harsh-sounding on our harps. For this reason, we currently only offer nylon and natural gut.

Our goal in designing and producing strings has been to create a particularly even tonal progression all the way down the range of each harp, so that there is little difference in tonal quality from one type of string to the next.

We include a string chart with each harp showing the string gauges and recommended tuning for that harp. We also mount another small string chart discreetly in the soundbox as a permanent record of the string set.

Unlike guitars, where pretty much any standard guitar string set will work, harp strings are much more specific, and it's important to make sure you are getting the right ones. If you use strings that your harp wasn't designed for, at best you'll probably have issues with tone and sharping lever function, and at worst, you might be adding too much tension to the harp and could risk pulling it apart. With monofilament strings, the diameter is really all you have to pay attention to, and you can usually find those anywhere harp strings are sold. However, the wound strings vary quite a bit in materials, diameter and length, and are usually custom made for a particular harp model. For those, it's best to buy them directly from the harp maker, or ask the maker what they recommend.

How we make our wound strings

Strings are a very important part of a harp's tone, feel and functionality, and we owe a great debt to Robbie Robinson (of Robinson's Harp Shop) for his early advice about making our own wound strings. He taught us everything he knew about harp strings and showed us how to build our own stringwinding machine. Because we make the strings ourselves, we can be sure we're maintaining a consistently high quality, and we can also make small changes and improvements when we feel they're important or beneficial.

We go to great lengths to find the best materials available. When we wind strings, we work hard to achieve a very even diameter, since strings that are consistently cylindrical along their vibrating length have a more pure and sweet tone than strings that are not.

We make our nylon-wound strings so that the wrap ends midway between the sharping lever contact point and the bridge pin. We've found that this gives the wound strings a cleaner sound and a professional look and enhances their longevity.

We are also careful to maintain consistent string diameters, since this is critical for sharping lever tone and function. Both Loveland and Camac sharping levers come in very specific sizes, each designed to work optimally on a narrow range of string diameters. If lever and string are matched properly, the tone of the sharped string is not significantly different from that of an open string, but if they are mismatched, it can result in buzzing or fuzzy-sounding sharped notes.

Replacing a broken string with one of a different diameter will also throw off the regulation, which means that engaging a sharping lever will no longer raise the string by an exact half step. To support our customers with strings that maintain proper tone and sharping lever regulation, we have a strict diameter tolerance of plus or minus .002" over the length of our wound strings.

Here's a short video of the stringwinding machine in action.