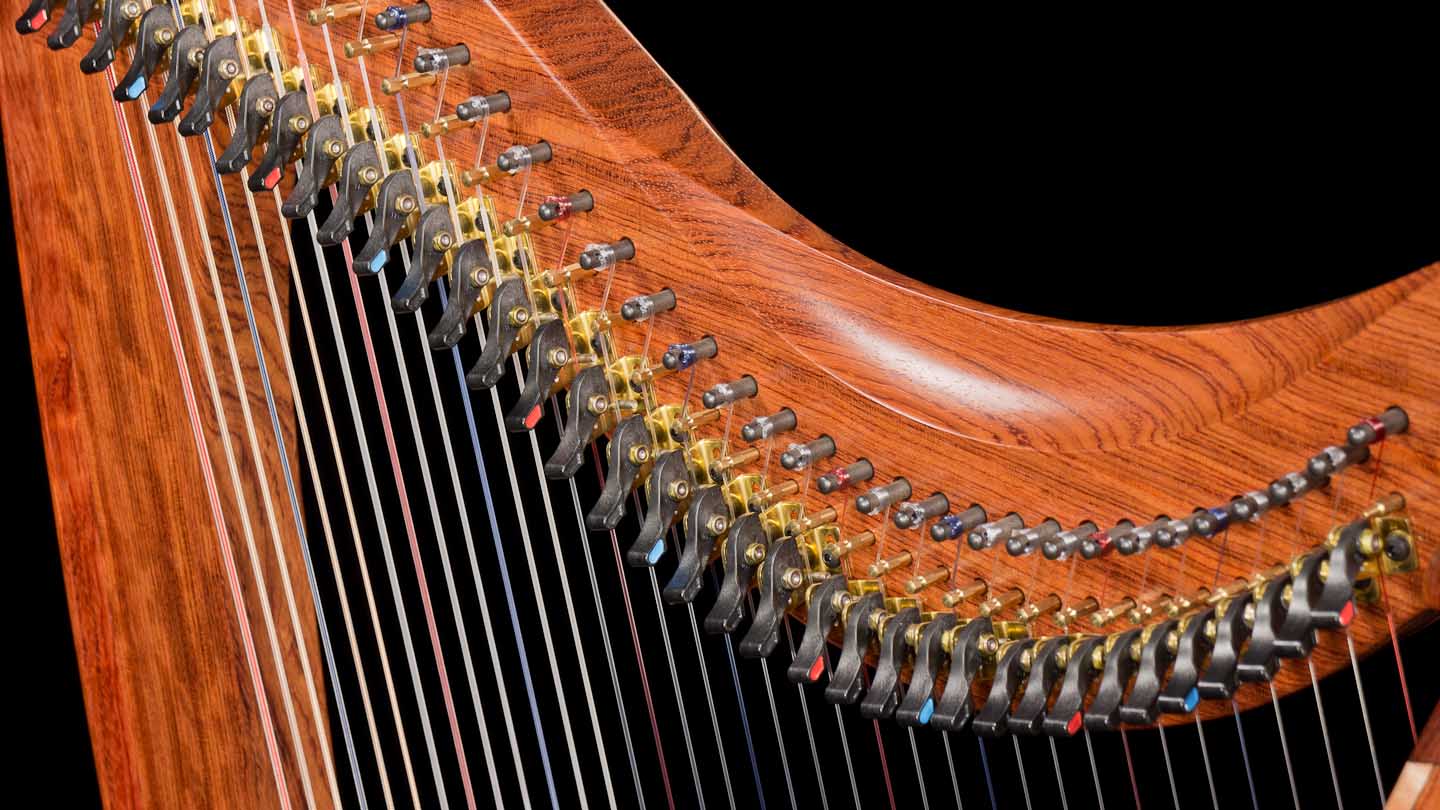 Sharping levers are small mechanisms that are mounted near the top of each string and are designed to shorten the string length the exact amount necessary to raise the pitch a half step when the handle is lifted. Sharping levers enable easy key changes and the playing of accidentals within a piece of music. (For more details on how they are used, see Using Sharping Levers.)

Installing and adjusting the levers is one of the most finicky parts of building a harp, and we go to great lengths to make sure our levers function and sound as good as they possibly can. A high-quality and properly-installed sharping lever should be able to achieve a perfect half step and do it with minimal loss of tone quality when compared to an open string.

Periodically, your harp will need to be regulated. This need arises because the harp gradually changes shape over its lifetime. The neck will lean over slightly and the soundboard will start to bow up a bit under the tension of the strings, and while this is very normal and also contributes to the development of the harp's voice, it does throw the regulation out of whack. If you notice that your harp sounds in tune with no levers up, but out of tune when you change the key, it means some of the levers are no longer raising the pitch by an exact half step and it's time to regulate! A new harp will need to be regulated more often than an older harp.

If you're near Seattle, you can always bring your harp to us for regulation, and there are also harp technicians who travel all over the country doing that work. But did you know you can also learn to regulate on your own? It is a time-consuming and detailed process, but it's not difficult to get the hang of it, and you'll come out of it feeling independent and resourceful! Tools and detailed instructions are available here.

This is also a good place to mention that the levers are specifically sized to fit the diameter of each string. If you change the size of a string on your harp, the sharping lever may not fit correctly, and the sharped note can sound dull, plinky or buzzy. 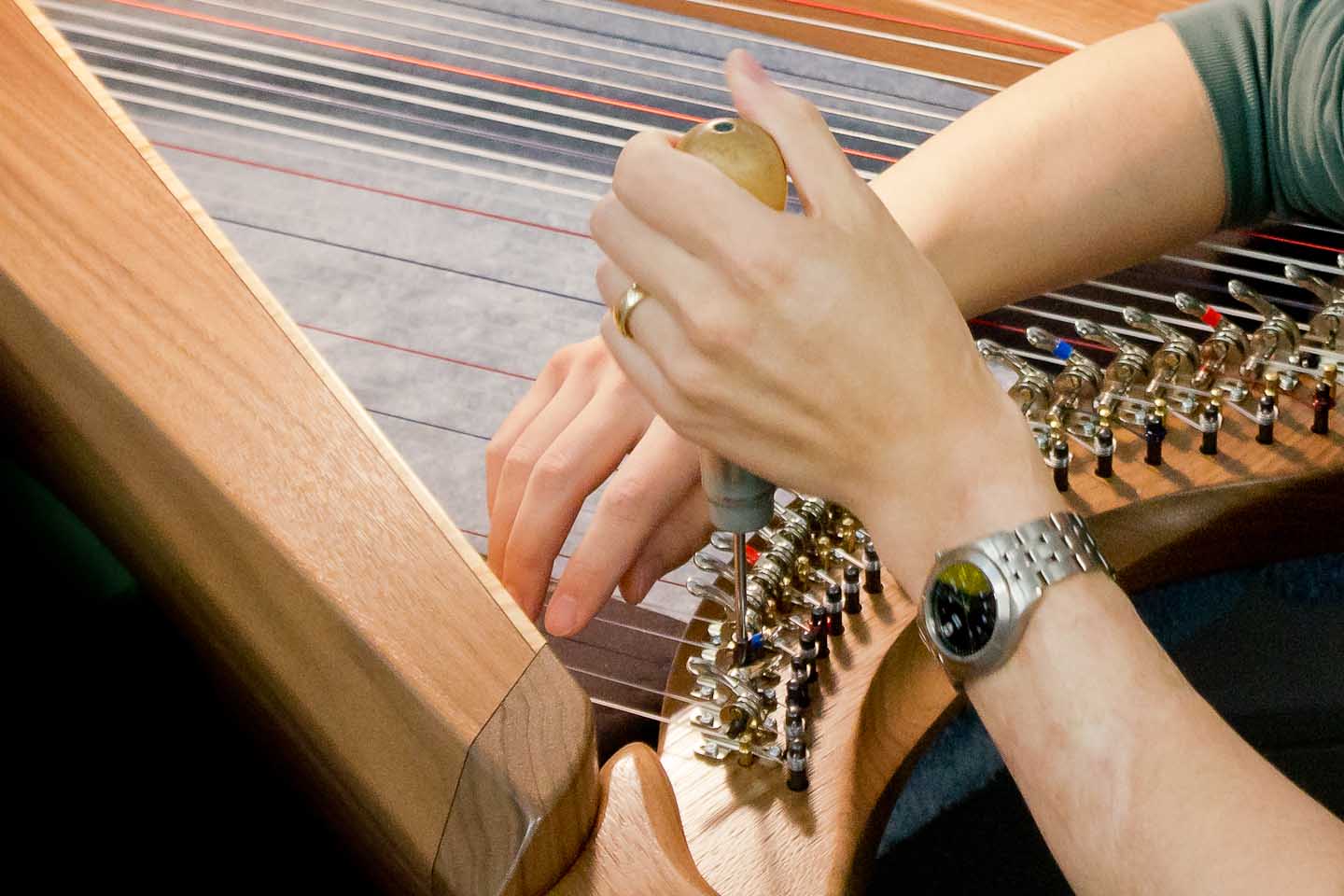 Loveland levers are made in the U.S. and were the first professional-grade sharping lever to arrive on the scene. We have been installing them as the standard on all our harps since they were developed in the late 1980s. They have an easy operation, good value and durability, and, when installed properly, virtually undiminished tone. Loveland levers have a brass base and black polycarbonate/delrin handles, and we add a touch of red and blue to color-code the C and F levers for easy identification.

Camac levers, made in France, are nickel-plated cast and machined metal, with some plastic parts, and are noted for their smooth mechanical function. They are available as a special order option on most of our harp models at an additional cost, although for logistical and pricing reasons, we do not offer them on the Ravenna 26, the Serrana 34, the Boulevard 34 or the FH26 Double-Strung.

Ultimately, the choice of lever type is one of personal preference in feel, look, sound and cost. We have done blind tests comparing the tone preservation of each type of lever (the difference in sound between the open string and the sharped string) and the differences are small. Each lever actually performed slightly better in a different range of the harp. However, the general agreement is that Camac levers do a slightly better job of tone preservation overall, which may be noticeable to a critical player who consistently plays with many levers up.

The Lovelands are robust and rarely sustain damage, even in deliberate crash tests conducted in our shop. Occasionally the handles can crack with use, but they are inexpensive and straightforward to replace without removing the lever from the harp. The Camac lever handles are more vulnerable to breakage if bumped or knocked. They can also be replaced with the proper tool, although it more often requires removing the whole lever from the harp.

Appearance, obviously, is different and is just matter of individual taste. Overall, each person needs to determine which lever type meets their particular needs, budget and preferences the best. Check out our blog for a more in-depth discussion of the differences between Camac and Loveland levers.