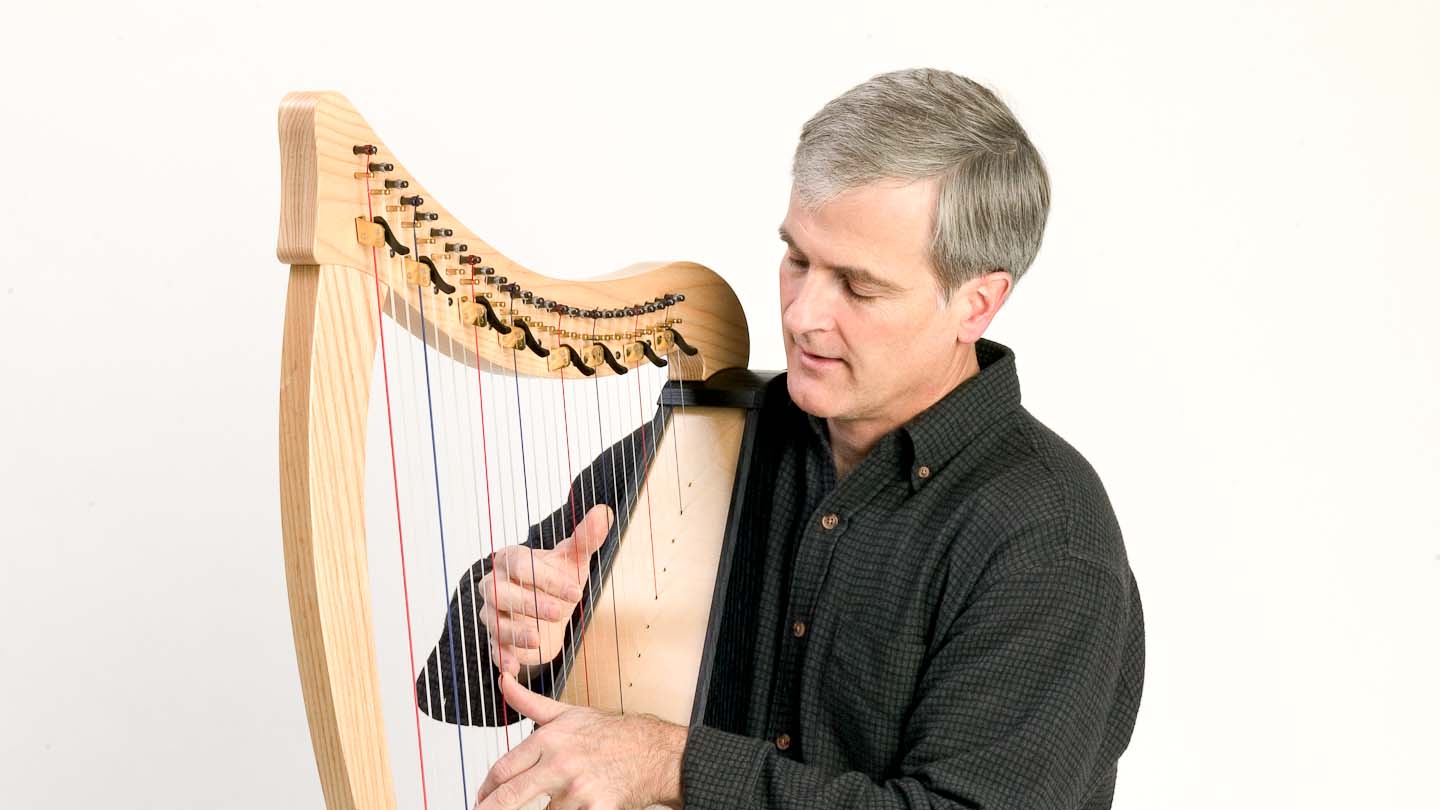 We talk to a lot of people who know they want to play harp, but have no idea where to start looking or what kinds of questions to ask. We know how overwhelming that can feel! When you don't know the language, it's difficult to find your way around without a guide, so here are some answers to commonly-asked questions about harps to get you started. There is a lot more detailed information elsewhere on our website if you're curious, and we're always happy to answer questions or chat with you about harps!

The harps we make are commonly referred to as Celtic harps, folk harps or lever harps, and they are different from the much larger pedal harps you see played in orchestras. Pedal harps have complex mechanisms that allow for quick key changes or accidentals by engaging foot pedals, which is often a necessary function for orchestral playing, and they tend to be quite a bit larger, heavier and more expensive than lever harps.

What are the levers for?

A sharping lever is a small mechanism that raises the pitch of an individual string by a half step. If you have a harp with no levers, you can easily play music in a single key (C major, for example), which is like having only the white notes on a piano. To play in a different key, you'd need to grab your tuning wrench and re-tune several strings. Levers give you more versatility by allowing you to change keys without re-tuning. If your harp is tuned in C, you can flip all of the F levers to make them F sharps, which puts you in the key of G major. If you want to go back to C, you just flip the levers back down again.

What kind of music can you play on a lever harp?

The sky is the limit! We have heard everything from Celtic tunes to music from other folk traditions, classical, jazz, hymns, pop songs, original compositions, improvisations, and therapeutic music. If your goal is to play in an orchestra, you can start on a lever harp, but will likely need a pedal harp later on to play certain complex pieces of classical repertoire. Aside from that, a lever harp will let you do pretty much anything you can dream up!

Lever harps range in sizes from tiny harps that you can hold in your lap or wear on a strap to harps that are taller than a person. We make a range of sizes in the middle - between 26 and 36 strings. At 39" tall, a 26-string harp can sit on the floor and be a child's harp, or it can be raised up on legs to a good height for an adult. A 36-string harp at 54" tall has a fuller sound and more notes in the bass range, but is also more expensive and heavier to lift. It is just as easy for a beginner to learn on our large harps as it is on the small ones.

How much do harps cost and why?

The lever harps we make range in price from about $1000 up to about $7000, while pedal harps (which we do not make) tend to be upwards of $10,000. Harps are in a slightly different price category than many other instruments because of their complexity. The cost of the hardware alone (the levers and so on) is a major portion of a harp's price, and building one requires a lot of specialized hardware! Because of this, it is difficult to find a cheap harp that isn't cutting corners somewhere. While you might be able to find a perfectly good student guitar for a few hundred dollars, a similarly-priced harp may have tonal, functional or structural issues that make it frustrating to play. It is no fun to deal with strings that won't stay in tune or sharping levers that don't work well. Harp playing should be fun, even when you're just starting out!

What is the lowest-priced Dusty Strings harp?

The Ravenna 26 is our lowest-priced harp, with a range of prices depending on how many sharping levers it has. At the basic level, you can get just the harp and a tuning wrench, which is all you really need to get started playing. We wanted to make harp as accessible as possible for someone on a budget, so everything else can be added later on, even the sharping levers! 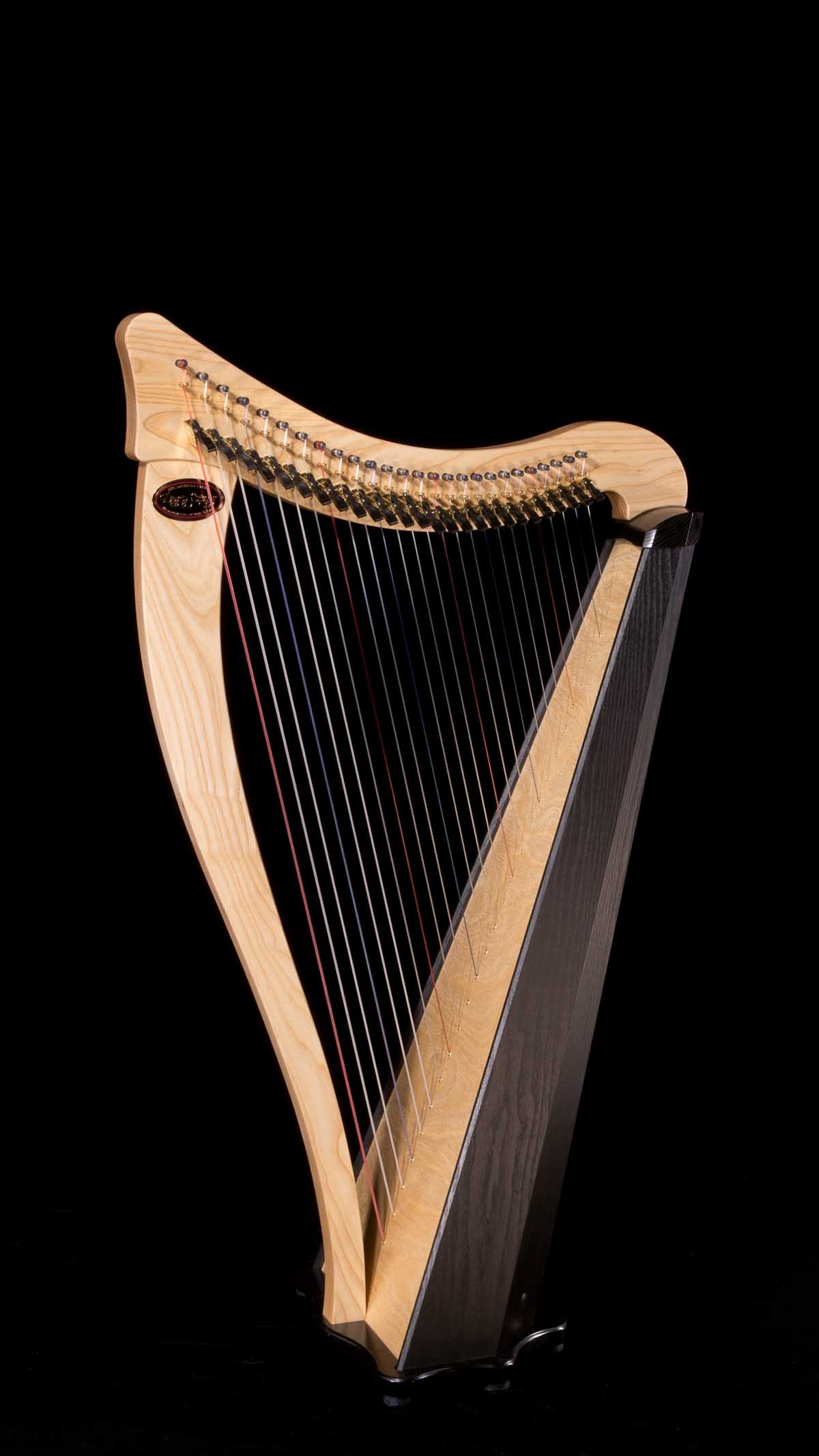 Do other people make cheaper harps?

Yes, but before you buy one, it is a good idea to ask around, read reviews, and even play one in person if you can. You'll want to make sure that you like the sound, that the construction is well-executed, and that the tuning pins and sharping levers are of good quality and are properly installed and adjusted. If it's difficult to tune or if the levers don't function properly, for example, these could be signs of future headaches.

What about the quality of the Ravenna?

We designed the Ravenna specifically to be as affordable as possible without sacrificing any of our high quality standards. We build these harps in our shop in Seattle using the same hardware and woodworking techniques that we use on our top-of-the-line harps because we want anyone playing the Ravenna to love the sound and to have a positive and frustration-free experience. We are able to offer them at a lower price than our other harps because of the unique way the soundbox is put together, which saves us a lot of time in the construction process.

We love to talk about harps, and we especially love helping beginners navigate through all the choices and options (What size? Do I need a case or not? What about a spare string set?) so please email or call us if we can answer any questions for you! We also invite you to explore this website, which contains a ton of information, including photos and sound clips for all of our harp models.

We have several harp dealers around the country, and would be happy to find out if there is a store near you where you can go and try out harps, rent a harp, or possibly find a used one for sale. If there isn't a store nearby, we can ship you a harp from our workshop in Seattle with the guarantee that you can return it for a full refund (minus the shipping cost) if it doesn't meet your expectations. We also work with a financing company we can tell you more about.

You can search the internet for harp teachers in your town, check with your local Folk Harp Society or American Harp Society chapter, or take advantage of the teacher referral list compiled by our good friend Sylvia Woods. There are an increasing number of teachers who offer long-distance lessons via Skype, so it's not absolutely necessary to find someone in your area. There are also a bunch of resources that can help you learn on your own, from books and DVDs to YouTube videos.

Can I really do this?

Absolutely! There is no "correct" age to begin playing the harp - in fact, some of the most satisfied beginners we've heard from are the ones in their seventies or eighties - and you don't need a musical background. You can make a beautiful sound on a harp with no experience whatsoever. Whether you end up playing for others or just for yourself, harp music spreads joy and peace wherever it goes, and we firmly believe it makes the world a better place.

If you're looking for a place to start, here are three harps from different parts of our price range. The Ravenna 26 is our smallest and most affordable harp, the Crescendo 34 is one of our mid-sized and mid-priced harps, and the FH36S is our top-of-the-line "flagship" harp. You can see more photos, check out prices and other details, and hear sound clips for each model. If you'd prefer to view our full line of harps, click here. 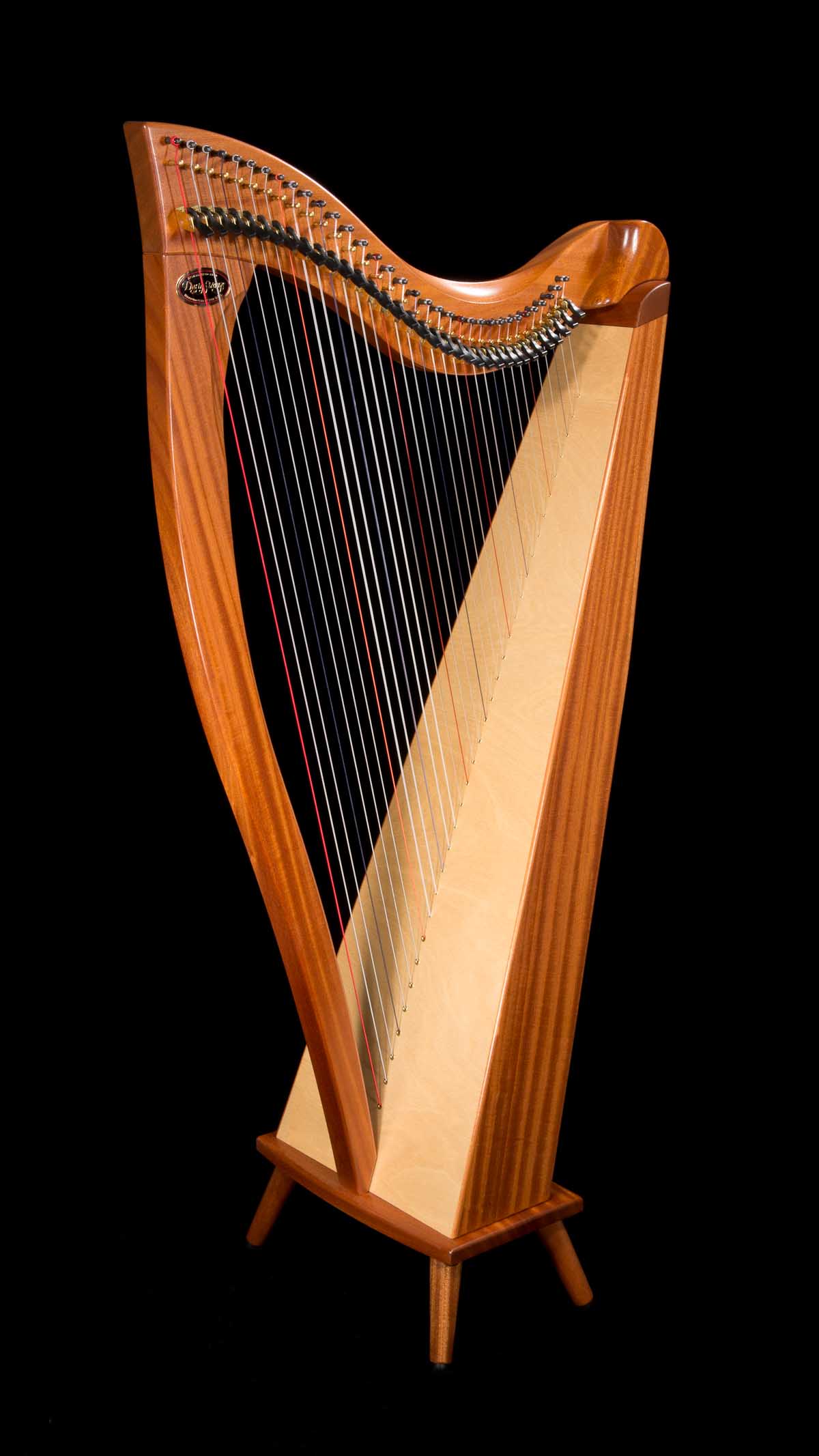 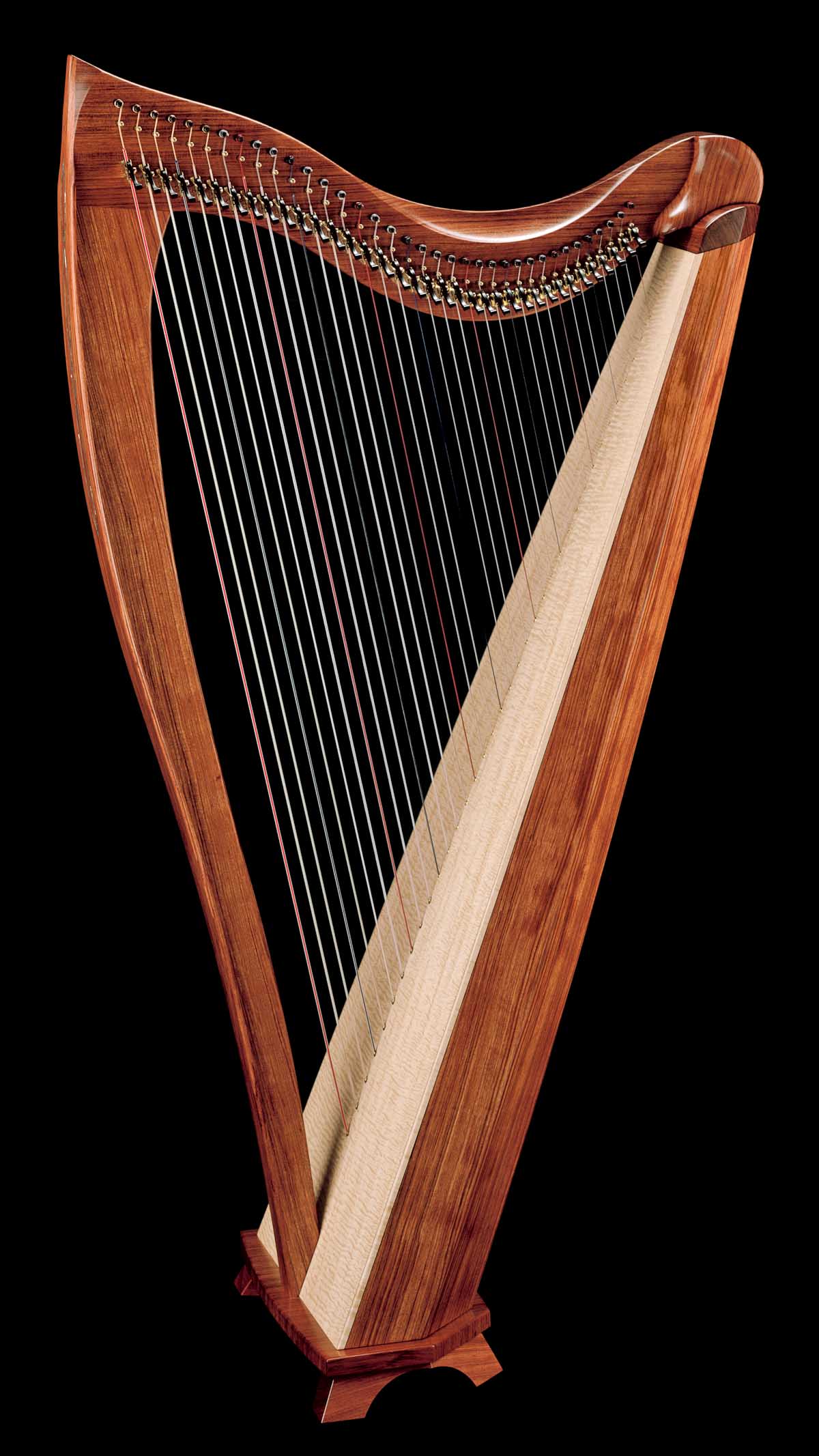