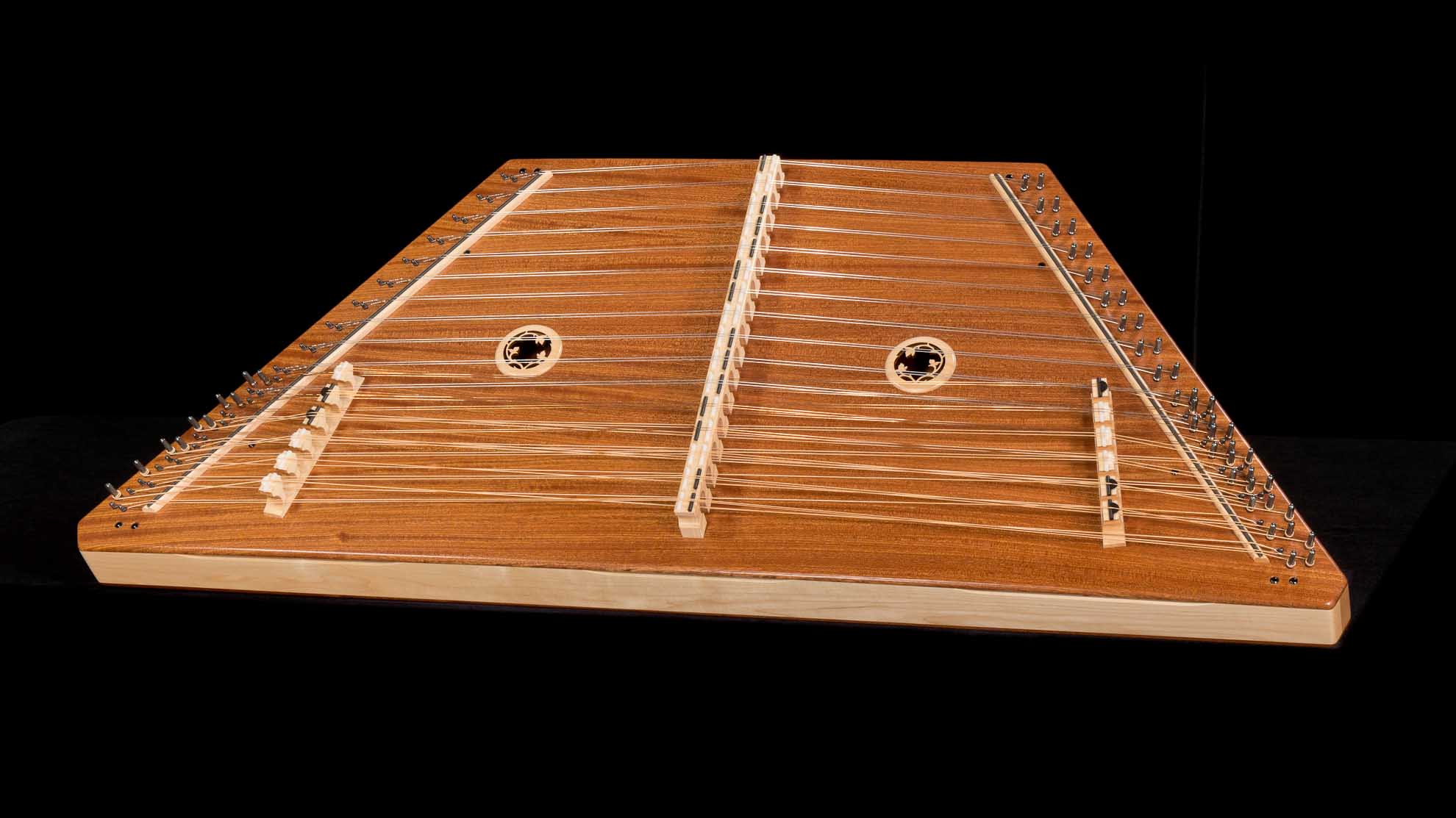 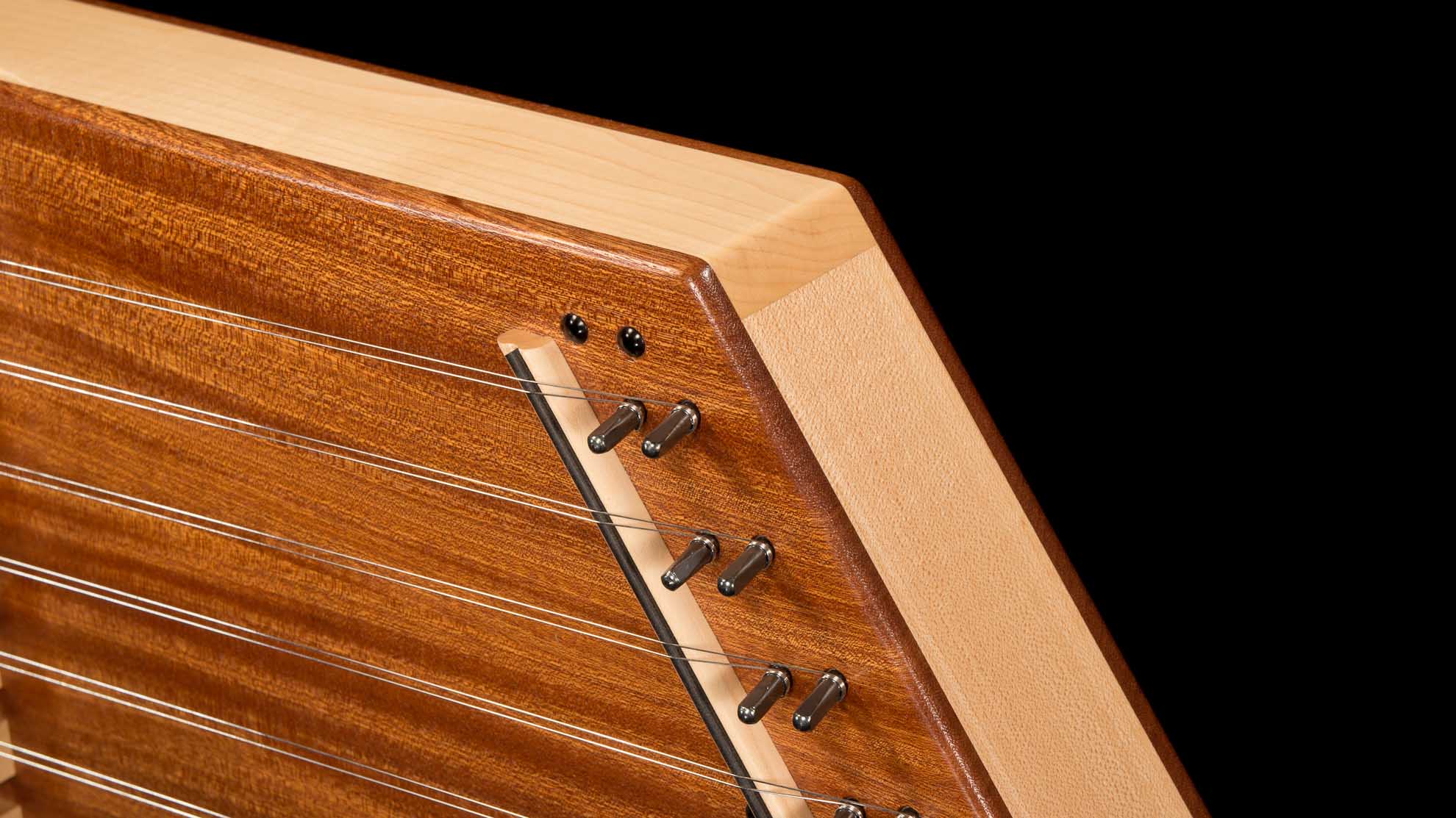 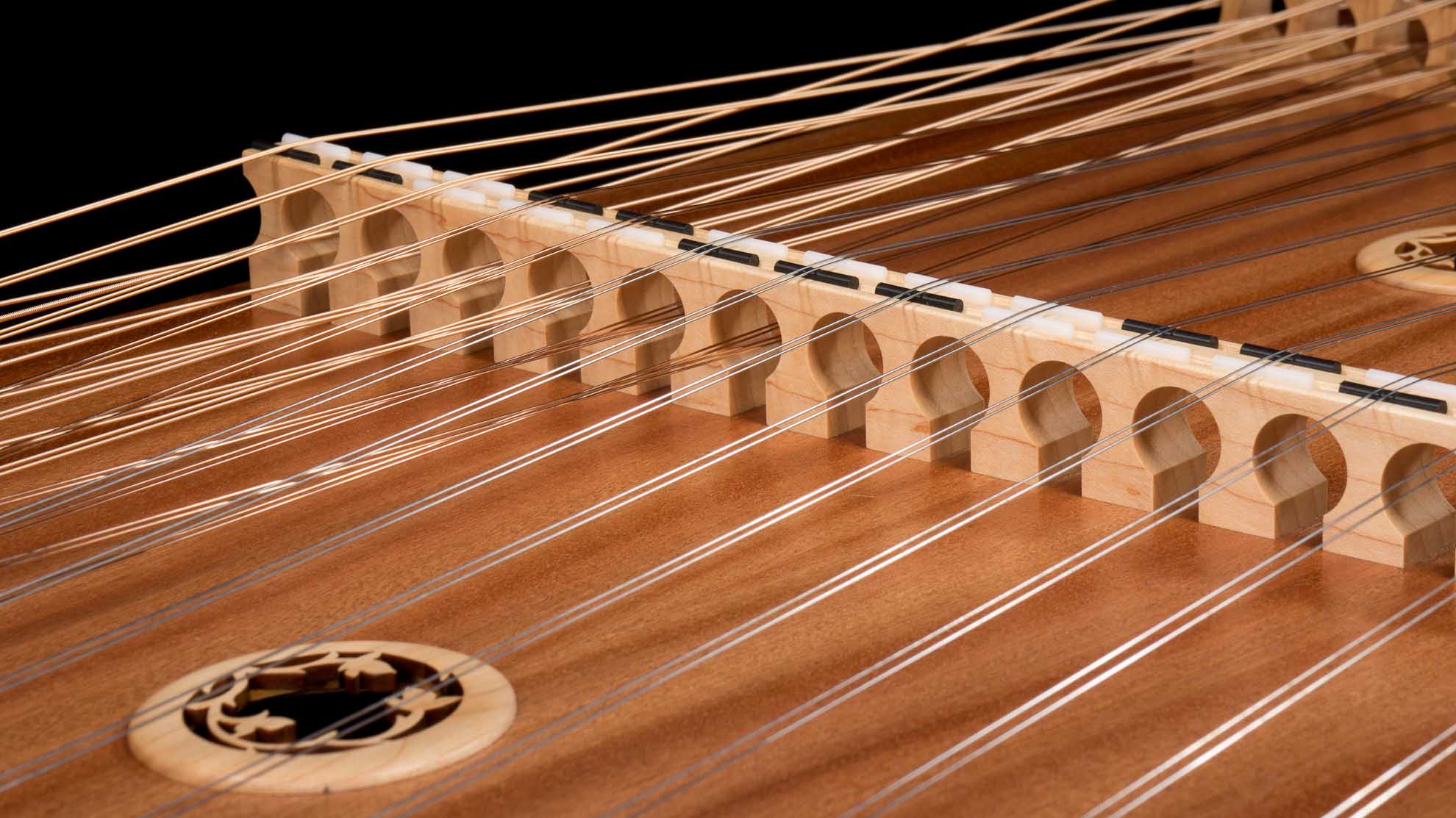 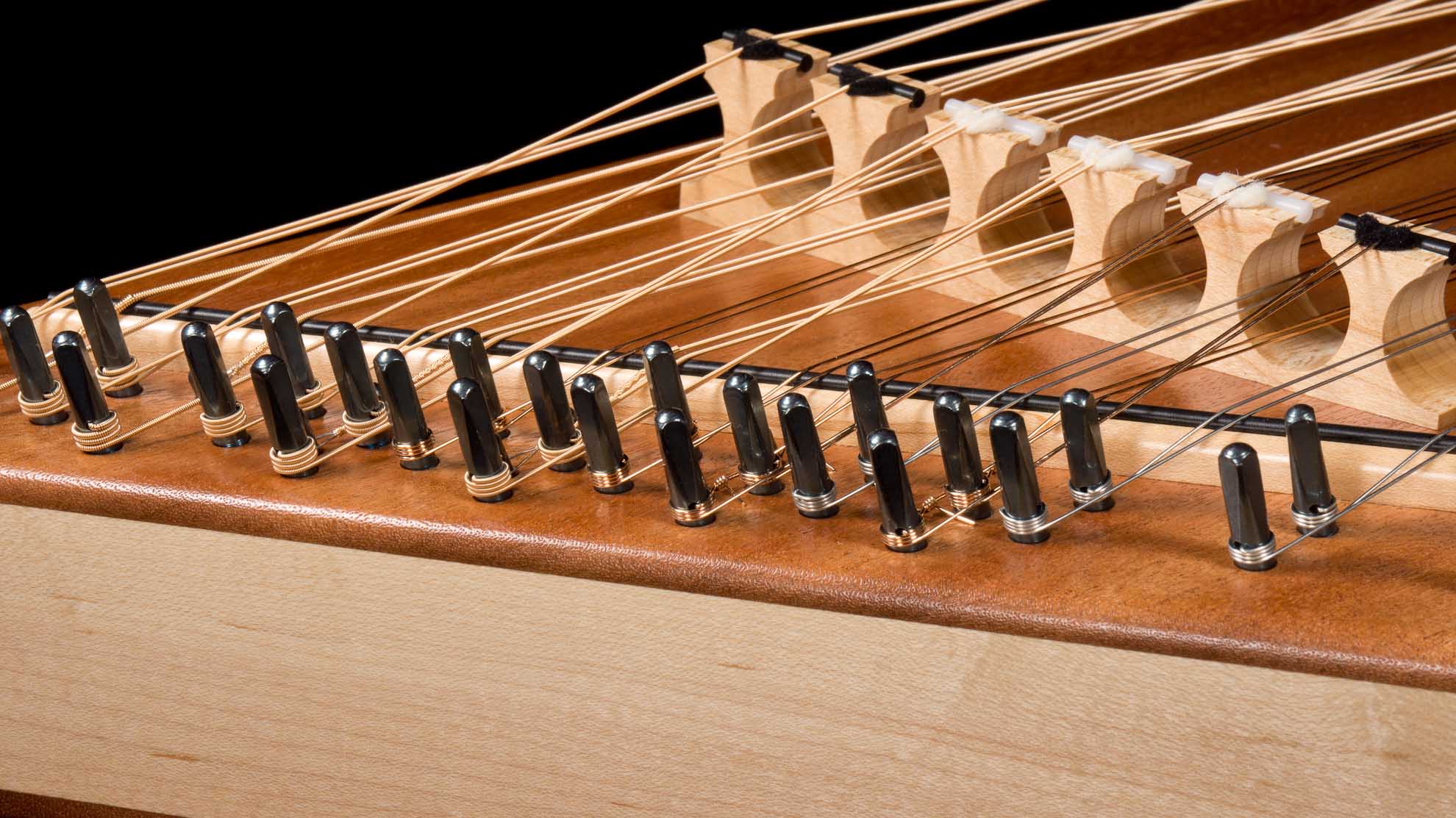 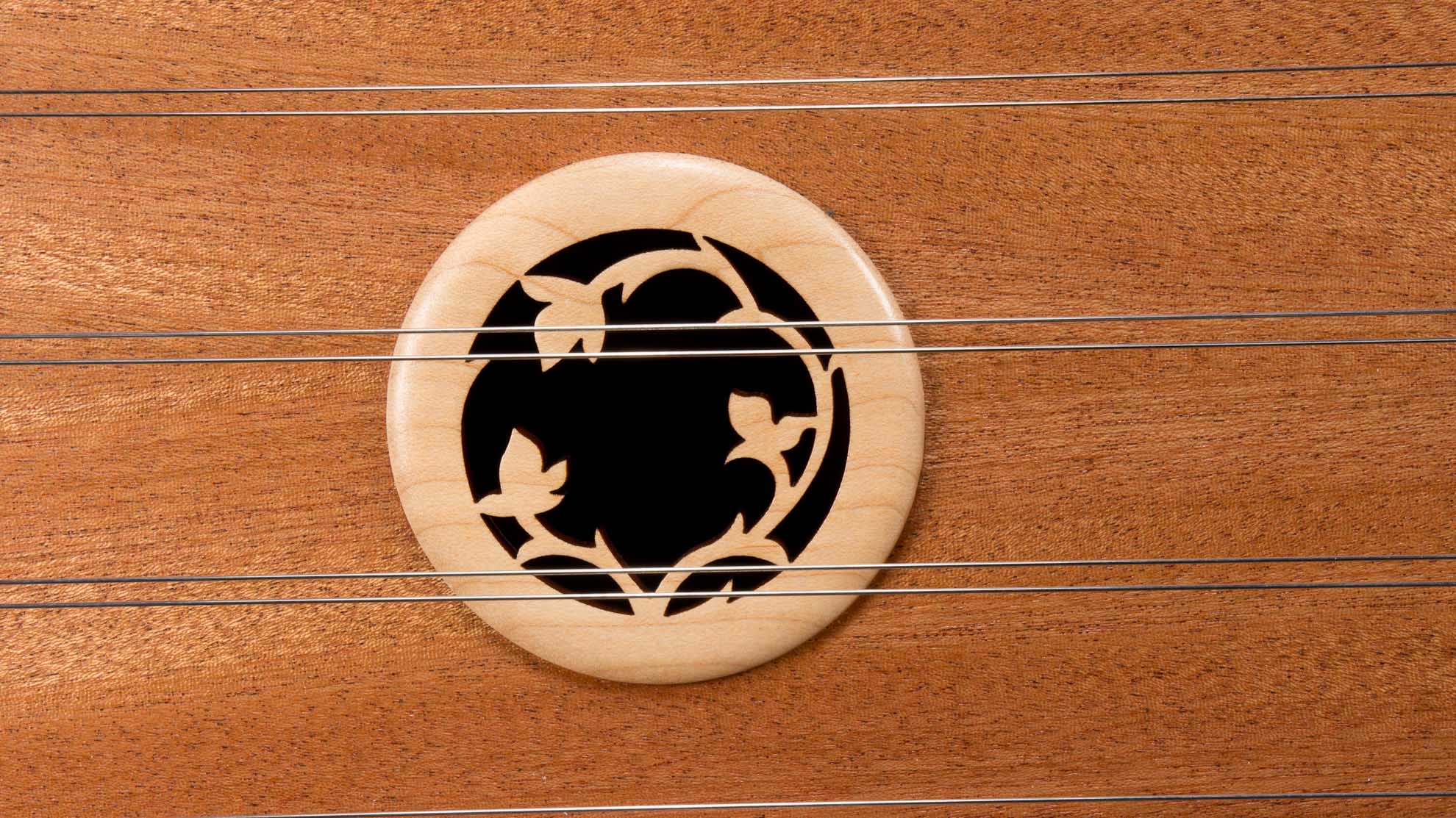 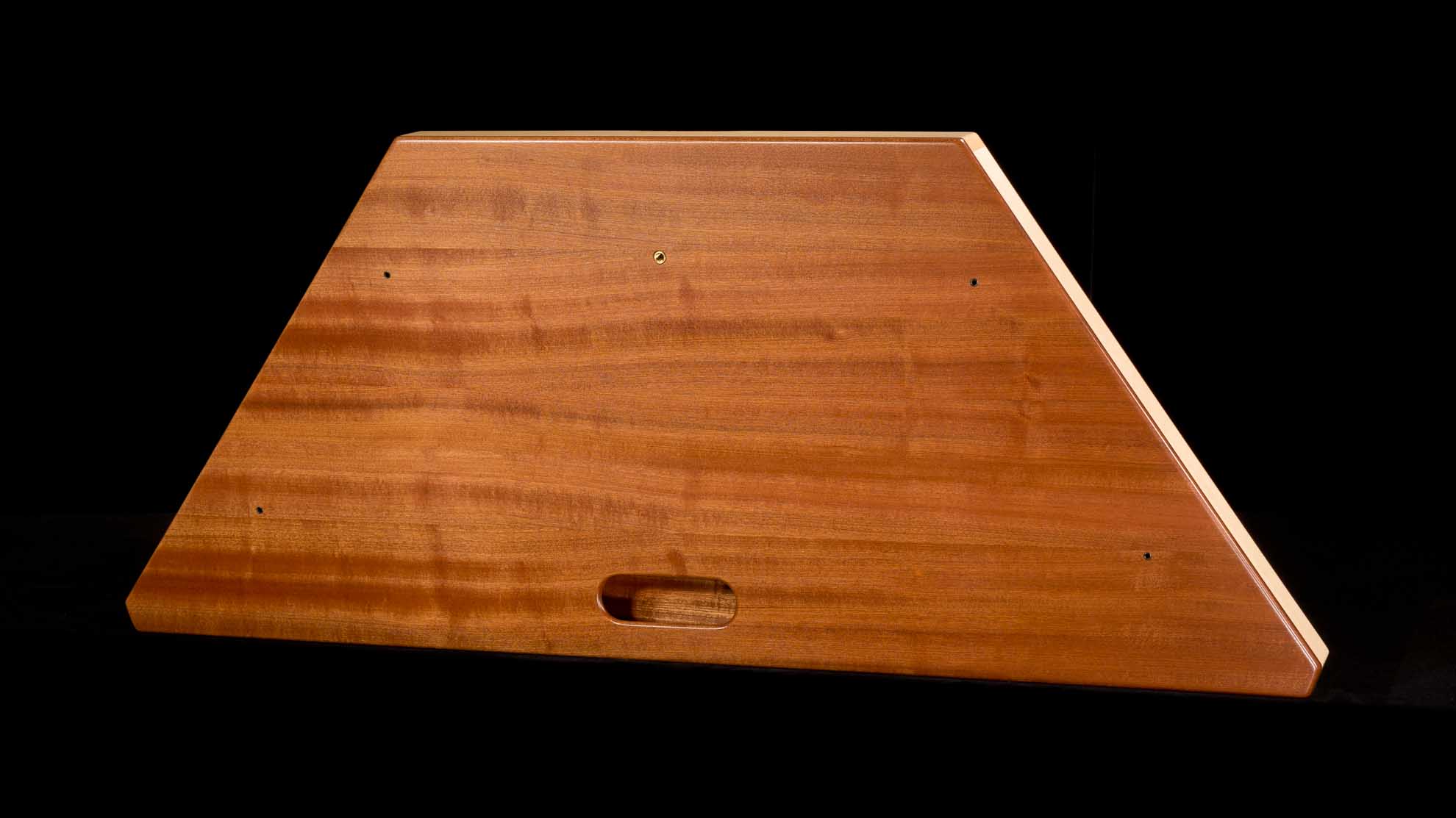 The piano dulcimer represents a great new concept in the dulcimer world - an affordable and simple way to bring the unique sound of the dulcimer into any keyboard player's realm, whether it's in a church, band, soundtrack, composer's studio, at home or around the campfire. Invented by long-time hammered dulcimer designer and builder Sam Rizzetta and based on the piano keyboard, it's a compact, fully chromatic instrument.

The tuning pattern uses half-step intervals across the bridge. Each course of strings crosses two markers on the top of the bridge, with white markers designating the naturals, or C major scale, and black markers designating the sharps and flats, just like on a piano. To play a C scale, just follow the white markers up the instrument. The sharps and flats are where a keyboard player would expect to find them - next to the naturals. Once you learn the pattern for any scale, it's easy to change keys, since all the scales follow the same pattern or a mirror pattern.

The piano dulcimer is a very versatile instrument, and is probably best-suited for players who are comfortable exploring on their own. It does not have the long history that the traditional fifth-interval dulcimer has, and is not widely taught. As far as we know, there aren't any piano dulcimer instruction books in print, but thanks to Sam Rizzetta, you can now download a free PDF of Playing the Piano Dulcimer by Madeline MacNeil.

Solid wood construction, 3½ fully chromatic octaves, a convenient size, a deep, rich tone, and an attractive price all come together in the PD40 piano dulcimer. An innovative feature is that the dulcimer is "damper ready," meaning that dampers can be installed when the instrument is ordered, or easily installed by the player at any time. Dampers provide sustain control and greatly increase the versatility of the instrument.

Please note that your dulcimer will not look exactly like the photos you see here. Because wood is a natural material, and the color and grain vary from tree to tree, each instrument we build is unique.

We make an effort to keep photos up to date as far as general design goes, but videos could show older versions.

Dusty Strings Chromatic Series dulcimers are professional-caliber instruments and are widely regarded as being among the finest hammered dulcimers available. However, this does not mean you have to be a professional to play one! As a beginner, you might be amazed at how quickly you make progress on an instrument that sounds fantastic and is well-made and satisfying to play. Regardless of your experience level, we think you’ll find the sophisticated tone and detailed craftsmanship of the Chromatic Series dulcimers to be well worth the investment.

The tuning scheme is a variation of traditional 5th-interval tuning, where the chromatic notes either replace duplicated notes or are added via extra bridges. We’ve found that it’s no different for a beginner to learn on one of our chromatic instruments than it is to learn on a more basic traditional instrument. More advanced players who are accustomed to traditional tuning will find it easy to adapt and will be delighted by the increased versatility of having access to all the sharps and flats. The chromatic capability opens the doors to musical styles such as classical, ragtime, bluegrass, jazz and rock.

Designed in collaboration with Sam Rizzetta, a highly respected inventor, builder and player of hammered dulcimers since the 1960s, these instruments have his signature asymmetrical design, which places the treble bridge perpendicular to the strings for ease of playing. The internal bracing system is more elaborate and sophisticated than our other models and, combined with the all-solid-wood construction, gives our chromatic dulcimers a resonance, clarity, and depth of tone that is unrivaled.

For the ultimate expressive instrument, we highly recommend the optional damper system. Dampers allow the player to stop the strings from ringing by pressing on a foot pedal, and can be used very effectively to support even more nuanced playing, complex arrangements and interesting voicings. The Chromatic Series dulcimers are now being built with pre-drilled and capped damper installation holes, which will streamline the installation of a damper system whenever it is desired.

The single sound hole is decorated with a hand-carved maple leaf insert, a signature feature of our chromatic line. Contrasting solid-wood binding and delicate multi-layered veneers called purfling add a professional finish detail to the soundboard. 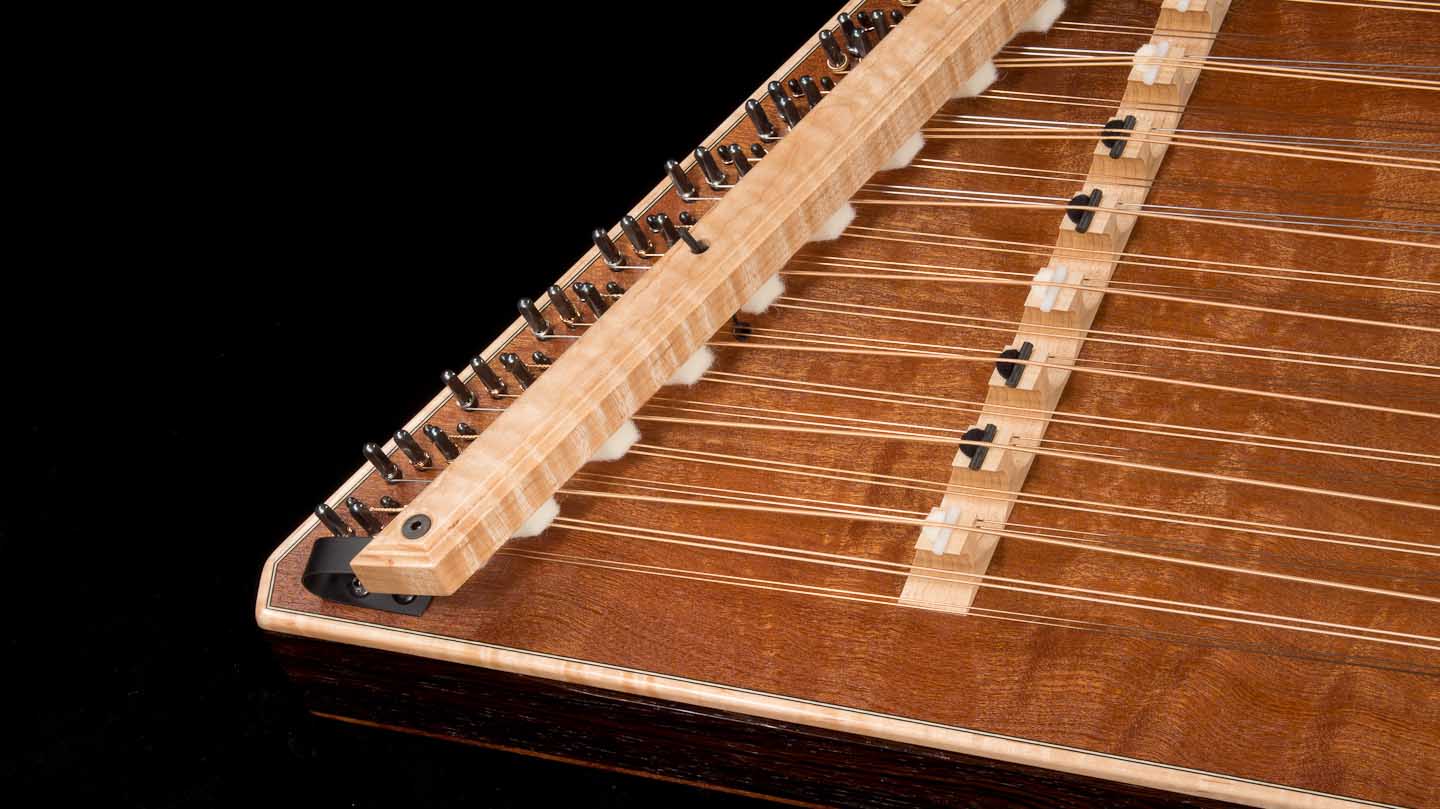 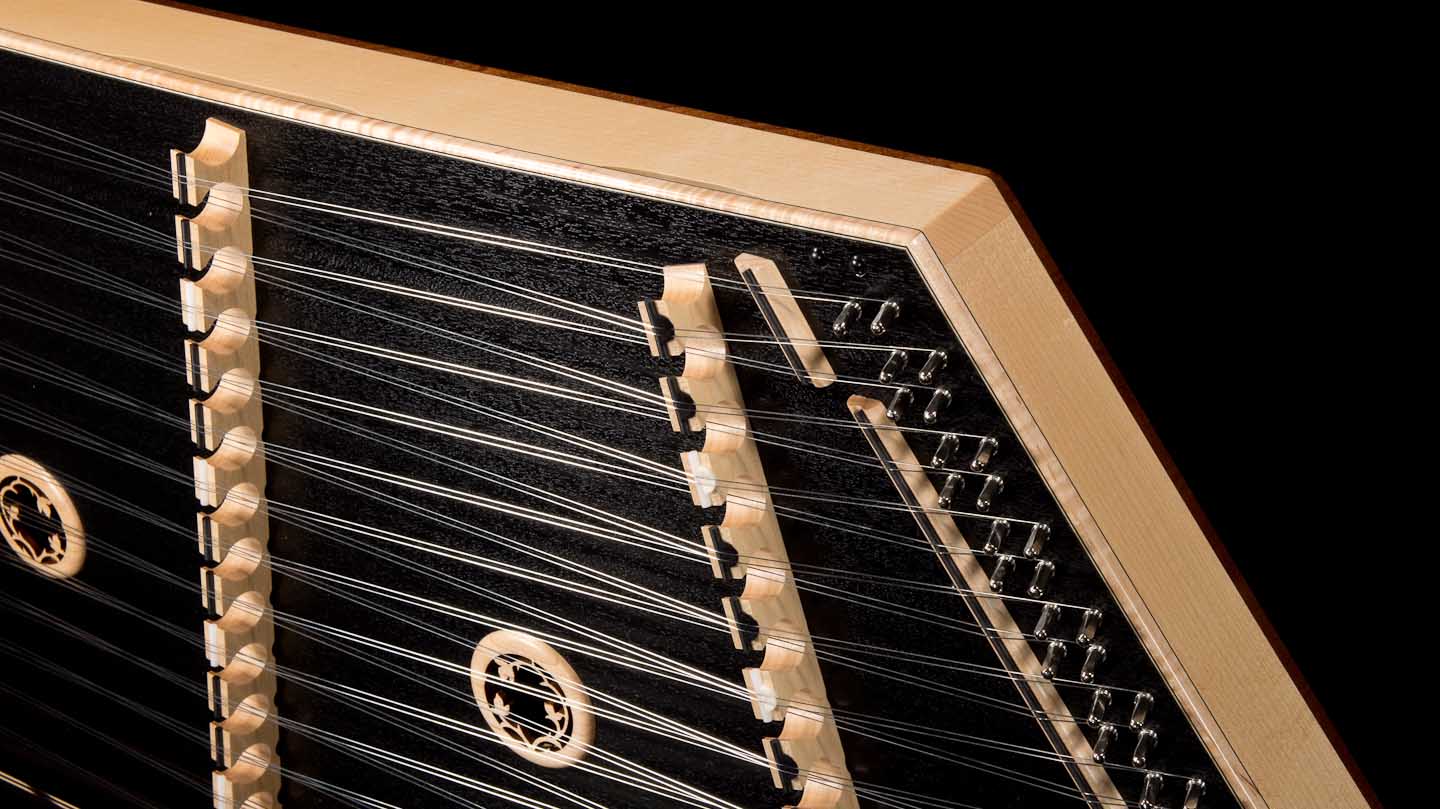 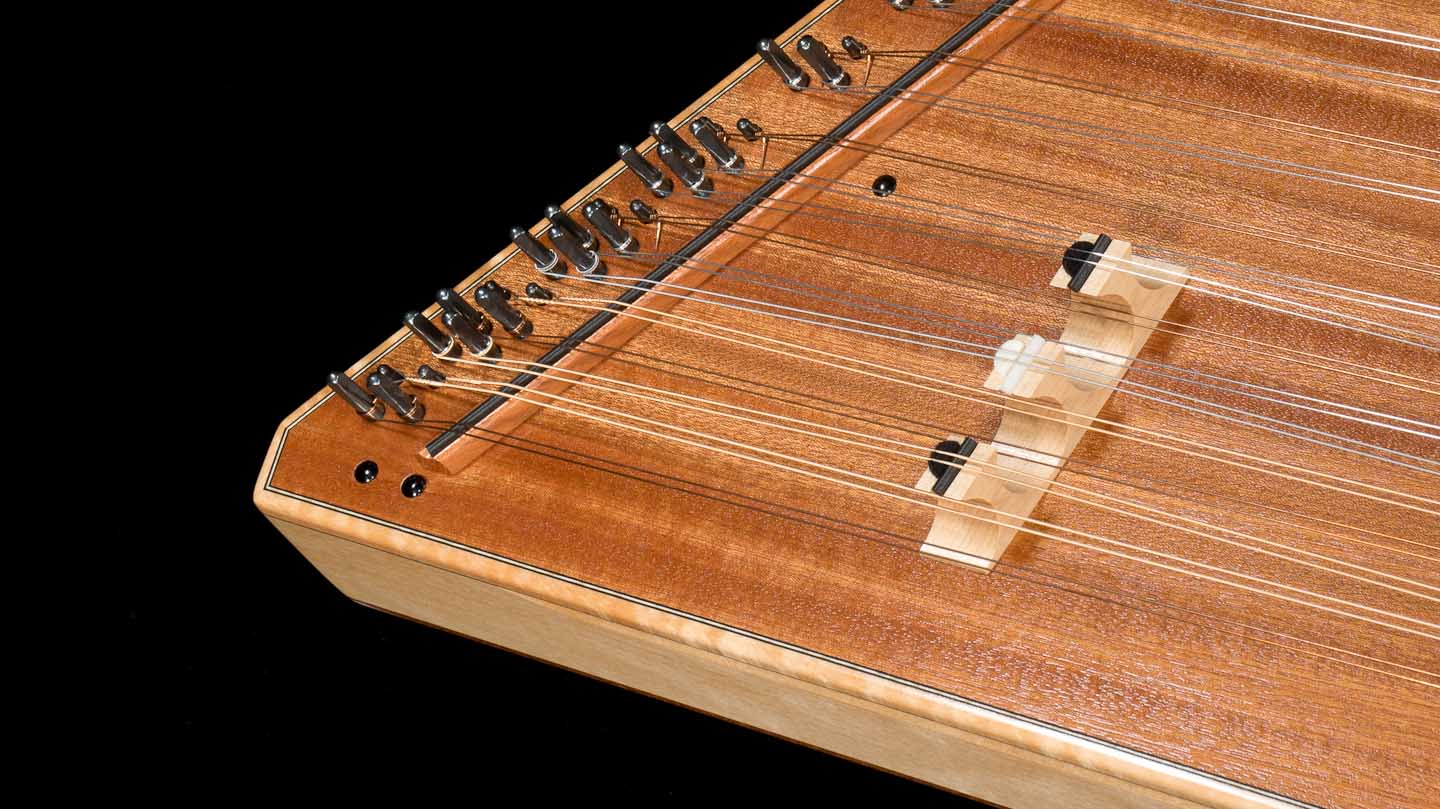 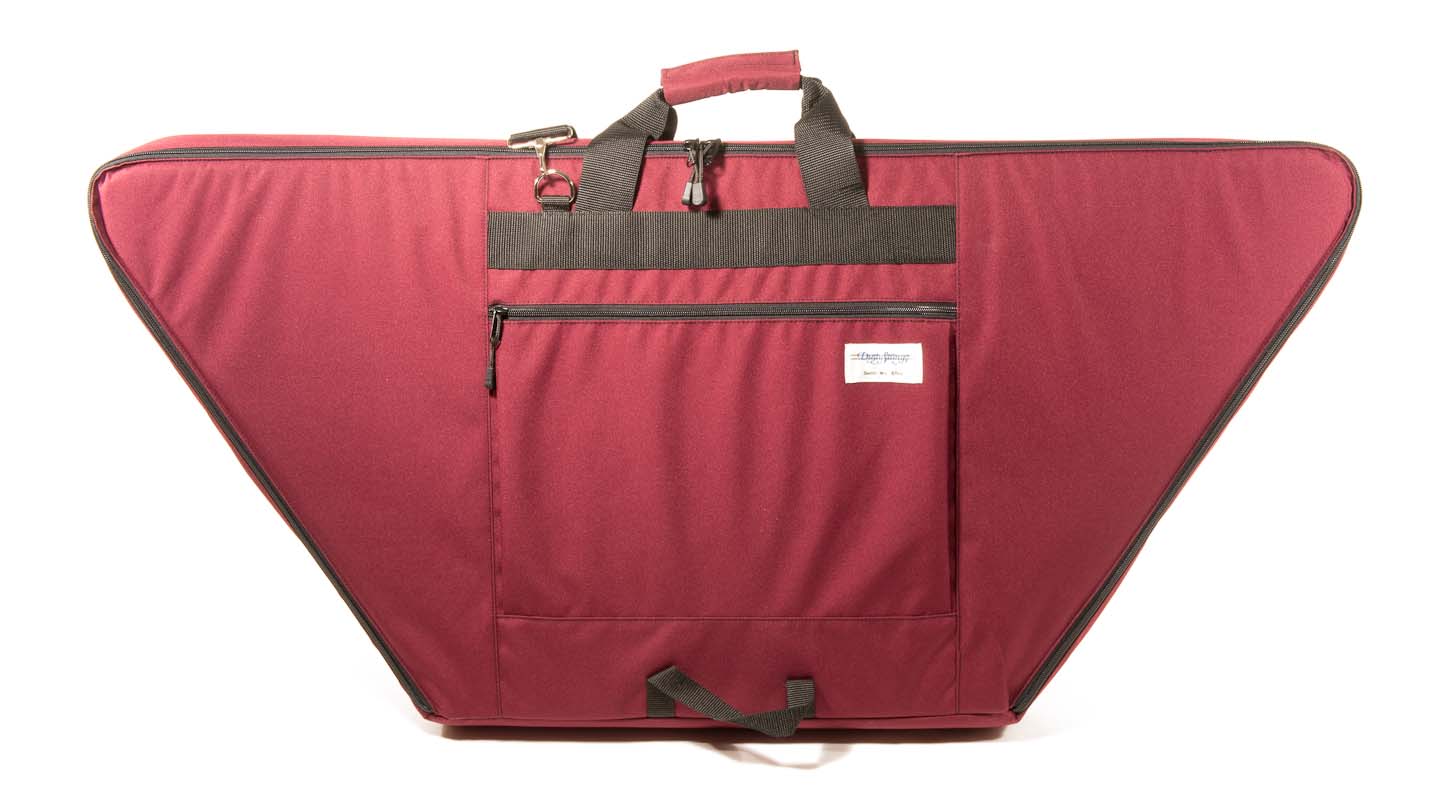 The PD40 has three bridges arranged in the piano dulcimer format. It is fully chromatic for its 3½ octave range, with bridge cap markers that mimic the pattern of white and black keys on the piano. The overall range is G2 to D6.